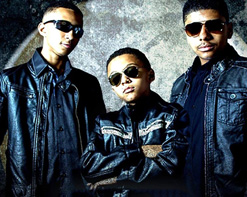 Muncie, Indiana had The Jackson 5, Boston was the original stomping grounds of New Kids On The Block and Gastonia, North Carolina is the home of The Gore Boyz! The Gore Boyz are the newest (and youngest) sensation to grace the world of pop and they are impossible not to root for. Sons of Drs. Herman and Shawnya Gore and equipped with talent that truly belies their years, these three brothers were groomed for a life of stardom from a very young age. The group is made up of Herman (17), Edwin (14), and the youngest brother, Sean-Michael, who is a mere 11 years of age. Their newest single, “Kisses For The Road” opens up a new world of possibilities for these youngsters to take The Gore Boyz to the next level, delivering grand, inspiring, irresistible pop – the kind with well-built verses and bridges that lead to instantly memorable choruses.

The group has quite the star-studded groundwork laid out for them to build upon. They’ve received vocal and choreography training from Big Mike of Day 26, choreography training from Chuck Maldonado, the award-winning choreographer from films such as Step Up Revolution & Stomp The Yard, and dance coaching from Tommy “Showbiz” Hill just to name a few. Oh yeah, and in the Summer of 2016, Sean-Michael was invited on stage with Justin Bieber at a show in Greensboro, NC as part of Bieber’s “Purpose Tour” contest. It should be noted – the group also stands for their community. As kids who aren’t even old enough to drive a car, they’ve donated $2250 of prize money to Rhyne Elementary School in their hometown of Gastonia. Outside of music, the brothers are all honor roll students with interests in sports, video games, and of course, girls!

Their recently released music video for “Kisses For The Road” has already accumulated over half a million views on YouTube and reached number 5 on Billboard’s Hot Singles chart in its first week. The video is crisply shot, displaying The Gore Boyz living large and loving life: singing, dancing and rapping in & around a picturesque mansion, expensive cars and even a private airplane with the group’s name on it. These boys are on a road paved for success, and you’re going to be the one to say, “I told you so!” when it happens.

The “Kisses For The Road” music video is the next step on the upward trajectory for this group, and we are truly honored to have The Gore Boyz on board with the HIP Video Promo team! We’d love to get you involved with all things Gore Boyz, so don’t hesitate to let us know what we can do on our end to make that happen. Please contact Andy Gesner and the HIP Video Promo team at (732)-613-1779, email us at info@HIPVideoPromo.com or visit www.TGBRocks.com for more info on The Gore Boyz.