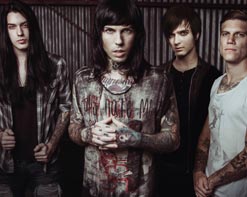 With more than 700,000 fans on Facebook & over 100,000 Twitter followers, Michael Orlando, better known as Michael Vampire reinvents himself with the new band The Killing Lights.

Michael’s determination to succeed stems from his near fatal car accident seven years prior when he was hit by a drunk driver which flipped his tour van. Pronounced D.O.A. at the hospital, he somehow made a miraculous recovery with only a broken arm and jaw. The ordeal left Michael with a fire to complete his lifelong dream in music and help others affected by hardship. His first endeavor as a front man spawned what became known as Vampires Everywhere!

VE! was a concept band based around the 1987 cult classic film The Lost Boys and Michael being brought back to life following the accident. They quickly gained label attention after landing their debut music video for “Immortal Love” on MTV’s Headbangers Ball in 2010. VE! signed with Century Media Records after being officially together for only 2 months. The band released three albums and toured both the US & Canada countless times including treks with The Black Veil Brides, Escape The Fate, Orgy and an entire summer run on the 2012 Van’s Warped Tour, all helping build them a very solid underground fan base.

The time came when Michael felt that VE! changed drastically from his original vision and he decided to switch gears, feeling he needed to return to his roots in metal. This spawned The Killing Lights, a name also inspired by Michael’s neardeath experience. In 2014 he and best friend/lead guitarist DJ Black started writing the songs that would comprise the new band’s self-titled debut EP, and recruited long time friend & stage manager Bryan Allan on bass and 21 year-old Joshua Ingram on drums.

With the band’s mix of hard vocals and giant melodies they plan on bringing something fresh to the very saturated rock scene. The Killing Lights is set to drop a single and music video this summer titled “Lies Spread Like Fire”, and they also plan to give away their debut EP for FREE to fans as a gift to those who have stuck with Michael through it all. A September drop is planned and the band will look to tour extensively into 2015 before getting started on their first full-length album.

Century Media and Hollywood Waste Records have introduced one of the greatest alternative-hardcore bands known to date, The Killing Lights. With an upcoming tour in the UK set for this year, who knows what’s next for this astounding band. For more information and the latest news, please contact HIP Video Promo at (732)-613-1779 or email us at info@HIPVideoPromo.com.