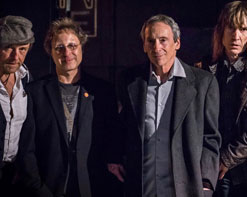 What sort of band puts out its debut album 50 years after its formation? You’d expect such a band to have been memorable enough to sustain the fascination of its audience during long decades spent dormant. You’d further expect that band to be made up of rock and roll true believers — wild men whose enthusiasm for rough riffs and sharp storytelling hasn’t been diminished a bit by the passage of time. You’d expect them to be local legends. In other words, you’d be looking for a band like the Sloths. For years, this explosively entertaining combo was a closely-guarded Southern California secret. Now, they belong to the world.

“One Way Out,” the Sloths’ smart, kinetic new single, is exactly the sort of rambunctious rock and roll that made the band a hot ticket on the Sunset Strip in the mid-1960s. There, the Sloths shared bills with the Doors, The Animals, Pink Floyd, and other soon-to-be-world-famous bands. “Makin’ Love,” a sizzling slice of proto-punk, was the Sloths’ calling card, but its salacious come-ons made it too hot for mid-’60s radio. But record collectors and garage rock aficionados kept it alive for years through word of mouth and inclusion on compilations. When the band got back together in 2011, they discovered a built-in audience hungry for new Sloths music — and younger punk rock listeners who could recognize a group whose time had finally come.

Since then, the Sloths have achieved international acclaim of their own. The band recently headlined the Purple Weekend in Leon in Spain, and they’ve brought their act across North America; in about a month, they’ll be making their return to SXSW in support of Back From The Grave. In addition to the scalding “One Way Out,” the new set features ten new tracks (including a remake of “Makin’ Love”) that demonstrate the group’s breadth: in addition to the garage rock that made the band’s name, these new songs incorporate elements from raucous power-pop, Detroit rhythm and blues, berserk rockabilly, and B-movie soundtracks.

Frontman Tom McLoughlin knows something about resurrections, and about horror iconography, too — in addition to his rock and roll notoriety, he’s known around Hollywood as the screenwriter and director of Jason Lives, the sixth Friday The 13th flick. In the witty, funny clip for “One Way Out,” he’s literally the devil’s advocate: McLoughlin shows up in a cosmic courtroom to tell the stories of a procession of desperate people driven to ugly ends. By the end of his testimony, he’s got the prosecutor flustered, the judge and jury dancing, and his clients acquitted through the anarchic power of garage rock. The long-haired, lithe McLoughlin looks the part of a punk lifer — like Iggy Pop, who he resembles more than a little, there’s a survival story inscribed in every line on his face. He’s just the sort of renegade attorney that a condemned man needs: everything he says carries the authority than can only come through long, hard experience.

It’s a true pleasure for all of us here at HIP Video Promo to have the opportunity to be a part of The Sloths promotional team, and are very excited to share this new video with you and your viewers. If you’d like more information or are interested in getting your hands on a copy of Back From The Grave, please get in touch with Andy Gesner and the HIP Video Promo team at (732)-613-1779 or email us at info@HIPVideoPromo.com . You can also visit http://www.TheSloths.org/ or http://www.BurgerRecords.org/ for more info.