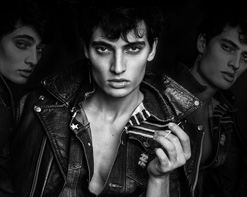 Breakout crossover sensation Trevor Drury is leaving his mark on the alternative rock music stratosphere with powerful vocals and fresh lyrics that pack an emotional punch. His unique blend of indie rock, jazz, blues, and R&B elements with traditional pop makes for an original sound that leaves listeners clamoring for more. Well-crafted, fully realized songs such as “I Know You From The 70’s” and “Snowy Nights” highlight Trevor’s expert ability to combine genres, justifying his status as an “up and comer to keep your eyes on.”

Trevor began to explore his musical talents early on in life while living in his hometown of San Diego, California. Starting at the age of 8 years old, Trevor learned to play the piano and eventually went on to study the art of vocal performance at San Diego State University, where he began writing his own music. It was while studying at college where his passion for songwriting come to the forefront and in 2015, Trevor’s debut project, “The Start,” showcased his unique style and solidified that his talents as a singer/songwriter. Trevor’s latest single, “Jealousy,” details his experience of love and loss and displays his musical capabilities in both vocal talent and songwriting. In a recent press review by Vennts, the reviewer writes that Trevor’s new single, “Jealousy,” is one of the hottest tracks dropped by him thus far, we get the privilege of enjoying a fusion of genres shamelessly blended together to create a fierce theme song for the betrayed.” http://ventsmagazine.com/2018/04/30/single-review-jealousy-by-trevor-drury/

In addition to his music skills, Trevor is a seasoned, professional model who knows how to present himself for the camera. This expertise shows in the music video for “Jealousy” as he viscerally portrays feelings of betrayal and confusion. As he sings about losing his sense of security in a relationship, the video’s dramatic editing style illustrates Trevor’s loss of control. Distorted shots of Trevor on his knees singing “I want control” match the intensity of his vocal performance and the song’s overall aural aesthetic. Demonstrating his vulnerabilities through music is integral to Trevor’s song making process and allows for listeners to relate to him on a personal level. The deep emotional and human connections fans make while listening to his music is what causes Trevor’s work to stand out from the rest.

With nearly 77,000 followers on Spotify and a new project coming soon called A Year Of My Life, Trevor is on his way to climbing many rungs on the music industry ladder. Please don’t be shy about getting in touch to let us know what we can do on our end to secure Trevor’s “Jealousy” video in your programming and rest assured we’ll have plenty of outstanding Trevor Drury merch to set up online/on-air contests and giveaways throughout the campaign. Please feel free to contact Andy Gesner and the HIP Video Promo team at (732)-613-1779 or email us at info@HIPVideoPromo.com. You can also visit www.OfficialTrevorDrury.com for more info on Trevor Drury.