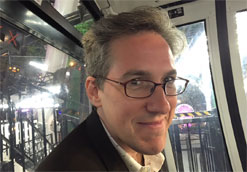 It’s not hard to figure out that Tris McCall is a cerebral musician. Known in the New Jersey scene as a journalist as well as a rocker – he’s written for Jersey Beat, NJArts, The Newark Star Ledger, NJ.com and many others – his musical vocabulary runs deep. The essay that ties into the new single “Conspiracy Theory” (www.trismccall.net/conspiracy) demonstrates that he’s given his subject matter some obsessive thought.

What separates McCall from other artists with a similar academic approach to music is that unlike most, he knows when to get out of his own way. He’s not weighed down by the burden of his own intelligence and the need to flex his scholarly or musical ego. Instead, he chooses pop-infused indie rock as the vehicle to deliver his music. Think Elvis Costello does calculus. Or Hop Along singing about the ins and outs of life in Madison, WI. On paper it may sound complex, but press play, let the music do the talking, and it becomes an easy listen that is so enjoyable that you may not even realize that you’re learning something in the process.

This is precisely the effect of award-winning filmmaker George Pasles’s new video for “Conspiracy Theory.” Tris may not be wearing a tinfoil hat, but that’s about the only surface not covered in a shiny, metallic, overlay. Channeling a peculiar form of American madness, McCall lurks around a confined basement space, leaning in towards the camera with the kind of body language that feels like he’s about to drop some crazy thread on anyone who catches his gaze. As he serenades the camera, the great conspiracies of our time (JFK, faked moon landing, 9/11, Paul is Dead, etc.) flash across the screen. Even contemporary characters like Felix Sater and Erik Prince get a not-so-honorable mention. Acting like gatekeeper to this vault of alternative reality, McCall calls out repeatedly “It’s all connected.” That is, unless it’s not…

“Conspiracy Theory” is a part of The Unmapped Man, a collection of songs from McCall’s Almanac, an ongoing web-based project. The Almanac is an open-ended collection of storytelling songs set in different cities throughout the United States. Using an interactive map at www.McCallsAlmanac.com, visitors can select a city, and they’ll get a song, a short story from the perspective of the narrator of that song, a cartoon, and even a few tourist tips. In total, the Almanac will spawn two full-length albums of incredibly unique, insightful, and introspective songs that makes the country feel a little bit more in sync. It’s all connected.

Not only is Tris McCall a big part of our beloved New Jersey scene, he’s also one of the oldest friends of the HIP Video Promo team. Naturally, it’s our hope that his video will be a natural fit into all of your programming. A fun, quirky video, a hummable melody, and an all around great guy. What’s not to like? Please get in touch with us here at HIP Video Promo for more information on Tris McCall and the “Conspiracy Theory” video. We’d love to hook you up with anything you may need to get this video into your programming. You can call Andy Gesner at (732)-613-1779, email us at info@HIPVideoPromo.com, or visit www.HIPVideoPromo.com, www.TrisMcCall.net, or www.McCallsAlmanac.com for more information on Tris McCall.