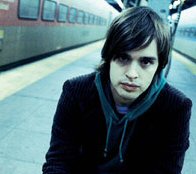 Twenty-three year old New Jersey native Val Emmich is unafraid to dig deep emotionally and expunge his guts for public display. With intelligent songwriting and an inspiring DIY aesthetic, the Village Voice recently garnered Emmich as an “emo pop prince.” His debut full-length CD Slow Down Kid (Childlike/Artist Amplification) hits stores on March 11, 2003. Time Out New York recently described the CD as “Emotion-heavy songs that benefit from careful arrangements and hearty, he-really-means-it singing.” With smart, intelligent lyrics and a voice that recalls people like Rufus Wainwright, Joseph Arthur and Pete Yorn, Val Emmich’s new CD “Slow Down Kid” is one of the notable debuts of the new year. And now with his debut video for “Shock,” it is clear that Emmich has the hooks and the looks to get to the next level. You might have seen Emmich’s mug on a few national TV commercials recently like “Got Milk?” and “AT&T Wireless.” Meanwhile, Emmich’s first national tour begins February 28th at The Mercury Lounge in NYC, with a showcase at SXSW confirmed for March 13th.

The “Shock” video starts out with boyfriend (Val) blindfolding girlfriend in what seems to be some sort of gentle, innocent, romantic game of love. Yet the mood quickly takes a sharp turn into darkness as the boyfriend leads the girlfriend downstairs into the basement in which he has planned an elaborate interrogation involving a real polygraph machine, a strange lab assistant, and several carefully planned exhibits. As the proceedings progress and the music accompanying the trial gets more and more intense, the boyfriend gets more neurotic and frantic. In the end, it is the girlfriend who has left and it is unclear whether the boyfriend has successfully proved his case for her infidelity or whether he is just a paranoid, over-protective, psycho, jealous boyfriend and the cheating was just in his head.

Everybody has had instances in their life when they’ve felt that they’ve been deceived or lied to by someone whom they thought was their friend. “Shock” explores one of those moments. Its success lies in the fact that it takes a serious, depressing concept such as deceit and gives it some humor. The video is rather lighthearted and funny, even though there is an underlying sickness to what is happening to this girl in this basement.

To create excitement surrounding the “Slow Down Kid” release, Emmich’s label Childlike Records has teamed up with indie promoter HIP Video to give programmers the opportunity to “Win the Guitar Off Val Emmich’s Back” contest. Any programmer that adds the “Shock” video for the add dates of March 7th and March 10th is entered in a drawing to win a 1994 Fender Custom American Stratocaster Guitar, complete with natural wood finish and ultra laser pickups! This is not one of those Japanese made $150 dollar guitars that are given away frequently. This axe was one of many Emmich used during the recording of “Slow Down Kid” and is valued at over $1000. Call Andy Gesner at Hip Video at 732-613-1779 or e-mail info@HIPVideoPromo.com for more details. The contest drawing takes place April 14th.