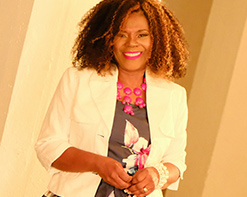 With a voice described by Billboard magazine as one that “exudes raw, soulful charisma”, Detroit born singer Veronica Brown is taking her gospel-infused dance pop to a whole new audience. The accompanying video for her new single, “My God” (PsalmsGroup), is an infectious clip that shows just how infectious the word of the gospel can be. HJ Ellison, CEO & President of GOSPEL SPOTLIGHT, calls it “a Happy Song, a Sing-along for everyone”.

Throughout her career, Brown has caught the attention of tastemakers across the spectrum. This has afforded her to opportunity to work with people like Grammy award winning mastering engineer Erick Labson, Michael J. Powell (producer for eight time Grammy Award winner Anita Baker), Steve King (engineer for Eminem, 50 Cent, Aretha Franklin) and Paul Riser (string arranger for Motown records and more recently R Kelly). Alongside these successes, Veronica has also had her work remixed by the likes of Junior Vasquez, Stonebridge and Nick Nice.

It’s not just in the music industry that she’s making her mark, but also on the everyday lives of people across the globe. In addition to her work with the vaunted names above, Veronica was awarded the Key to the City of Detroit after touring and performing for overseas US troops, and named Ambassador for the State of Michigan.

In her new video “My God,” Veronica has surrounded herself with friends and neighbors to unleash an outright celebration of their faith. VIDEO PRODUCER Gordon Cowie brilliantly scouted a variety of locations to place Veronica and company to sing, dance, smile, and praise. These city streets are adorned in a variety of murals and textures, each one creating a look more unique than the last. With the sun shining down from above and an unbridled joy in their faces, Veronica and her gang know that each and every day they are a part their own living mural of faith and celebration.

Guided by her faith, Veronica Brown invites everyone to stand side by side with her on her exceptional musical journey. This inspirational video carries a positive message wrapped in a dynamic package and would be a boost to video programming far and wide. For more information please contact Andy Gesner and the HIP Video Promo team at (732)-613-1779, email us at info@HIPVideoPromo.com. You can also visit www.PsalmsGroup.com or www.VeronicaBrown.org for more info on Veronica Brown.