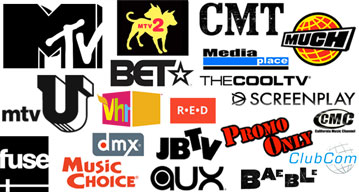 With over 17 years of building relationships with our cherished video programmers, we will ensure that your video will be properly submitted and showcased to high-profile networks such as: MTV Networks and all of their programming platforms, Fuse, BET, Music Choice, Much Music, MTV Latin America, Havoc TV, as well as Canadian networks such as BPM and Aux TV. The MTV Networks offer a very wide variety of programming opportunities for artists of all styles and status. Whether it be their specialty programming on MTV2 such as Subterranean, Rock The Deuce, Headbangers Ball, their ever-growing MTVu channel with their artist-breaking program The Freshmen, the extensive reach of the multiple MTV.com related websites and features, or their most recent success story, LOGO, which reaches the LGBT demographic internationally, we’ve got your submission covered. When applicable, we also work with the programmers at their other channels such as VH1, CMT, MTV Tre3 and others to make sure that your video is being pitched to all the right decision makers at these highly influential networks. Our goal is to give you the confidence of knowing that your video will be given serious consideration for programming to coincide with your release and marketing campaign.

Regionally, our goal will be to achieve extensive and sustained airplay of your artist’s video in major cities and hundreds of secondary and tertiary markets across the United States and in Canada. Programmers will be made fully aware of your artist’s video with promotional tracking calls, e-mail, blog updates, contest information and tour itineraries of the artist. Your artist will also be featured on this site, as well as our HIP Video Promo blog, YouTube channel, as well as our social media pages on Twitter and Facebook. A quick glance to your left will show you who we’re working with right now, and we invite you to picture your artist’s name on that list! Special promotions and on-air/online contests and giveaways will be pitched to many of the larger regional outlets including Music Mix USA, JBTV, California Music Channel, and VidDream, while always trying to create a buzz at the large, multi-market shows like The Cool TV, Power Play Music Television, Video Hits, Video Jam, and R&R TV.

On the Internet, we have long standing relationships with the established music video providers, like MTV.com, Fuse.tv, Yahoo Music, AOL Music, Billboard.com, Blastro.com, Spike.com, SingingFool.com, and MTVu.com. A very popular addition to the HIP services is the creation of our YouTube page, HIP Video on YouTube, which we utilize to showcase our artist’s videos on the popular website. One of the main benefits of this, apart from the considerable exposure it generates, is that you can be confident the quality of the video will be as high as possible, giving the viewer the chance to see it in it’s best form (as opposed to the more maverick postings of excited fans, etc., who do not have the desired focus on quality). We launched our YouTube page in February of 2007, and to this date, we have accumulated over five million views of the videos and original content on our page! You’ll also notice an exclusive features of our page, the HIP Clip and HIP Spotlight, which our video-centric EPKs produced specially for your artist when they come to the New York/New Jersey area. We also make this finely produced original content available to programmers all across the country to include in their own programming as well as make it available to the client for their own promotional purposes. We have learned from experience that if a video programmer uses a HIP Clip or HIP Spotlight, they usually will program the artist’s video along with it, keeping sustained airplay at a maximum for a longer period of time!

We don’t neglect the personal touch, either. Andy and his staff maintain very friendly relations with all the important point people at the international outlets (MTV, Fuse, Much Music etc.), but never take for granted the many video programmers and programming opportunities in all the little corners of the music video community. These “off the beaten path” markets are important, since this is where organic, grass roots support for a new and upcoming artist is many times originally generated. Each year in the month of March, Andy makes his cross-country pilgrimage (The HIP Video Promo Tour) to visit programmers all over the USA and spend quality face-time with them in their own market. With this kind of personal attention (from the founder of the company) you can be assured that your video won’t be falling through any cracks or being overlooked in programming meetings. The HIP staff is also the best in the business, a combination of youthful exuberance and years of experience in the music industry.