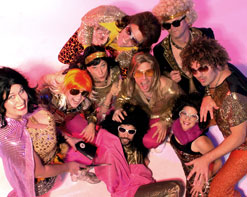 When we brought you the VO5 “Dance Originality” video in late 2015 the reaction was swift and unanimous: this group was killing it with their devotion to all things disco. The funky and sexy grooves, the polyester suit vibes abound, and the ease with which this nine piece band executes the soundtrack of a past era. With the new single for “The Disco Haiku” they’ve doubled down on the disco and even brought in a few old friends to star in the music video.

“The Disco Haiku” starts with a water drop, the sound of a frog from Basho’s famous haiku. Starting with the first five notes from the Bee Gees’ “Too Much Heaven,” the trumpet intro (performed by Steve Tyska, the band’s resident physician) then turns to a seven-note phrase then back to five. Five-seven-five “musical haiku” note sequences fill the song, including the main melody and verses.

Other traditional haiku techniques such as zooming into small details are used, for example, in the line “polyester suit no tie/sweat begins to flow.” With a smile, the chorus parodies disco’s excessive wish to please and be remembered in a similar way that the song “Dance Originality” makes light of the ever-escalating sexualization of pop American music and dance.

The video casts a polyester-clad Barbie and Ken as the leads of this sly jam. The colors, energy and references to the magical musical mosaic of the 1970s era are spot-on. Even those that aren’t old enough to remember roller rinks will yearn for the chance to skate in that big circle. The common shapes are found in shots of circular records, a roller rink, a disco ball, and the sand of an indoor beach zen garden, all subtle and exceptionally well executed.

We’re all very excited to be working once again with this fantastic outfit. The last time out they won hearts, minds, and the mtvU Freshmen contest, and this time out we’re hoping to break them into the mainstream consciousness! Please contact Andy Gesner at (732)-613-1779 or email info@HIPVideoPromo.com . You can also visit http://www.VOH5.com/ for more info.