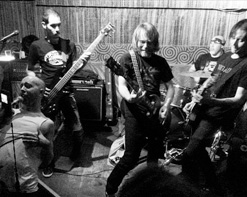 Label:
IT’S THE LEAST WE COULD DO RECORDS!
Video:
“HAVE YOU SEEN MY DRUGS?”
Director:
Johnny Celentano
Add Date:
January 27, 2017

Brooklyn’s World War IX carries the banner of vintage American punk music in the vein of Black Flag, Circle Jerks, and Murphy’s Law, doing so with their tongues firmly planted in cheek. Their songs are hook riddled cautionary tales that get your fists pounding and your heart pumping.

On the heels of the release of their brand new 7 inch, No Room For Improvement, the band has dropped their first single, “Have You Seen My Drugs?” and it’s exactly the sort of angry fun that World War IX has built their name on!

“Have You Seen My Drugs?” is 96 seconds of punk rock energy injected with a fair dose of cynicism and sobering realities. The clip is a whirlwind race around the house as a rather flustered man (played by guitarist Justin Melkman) seeks high and low for his drugs. With the guys of World War IX jammed in to provide the soundtrack, he tears the house apart and only finds his true drug with the gentle nudge of the band.

With a visual component that is refined and well executed, the band also ties together the video with the optics of their upcoming bio-comic Thank God It’s Monday. Director Johnny Celentano, never shy about being controversial, also adds in some provocative political commentary by way of mock newscasts to remind everyone that now is not a good time to lose their drugs!

It’s a terrific pleasure to be working with the World War IX crew to bring you this exceptional burst of punk rock excellence! We hope you’ll all find a home for it in your programming, but please let us know if there’s anything we can do on our end to help that along! Contact Andy Gesner and the HIP Video Promo team at (732)-613-1779, email us at info@HIPVideoPromo.com. You can also visit www.Facebook.com/World-War-IX-WWIX-122625501170653, jmelkmann.tumblr.com or Twitter.com/WorldWarIX for more info on World War IX.