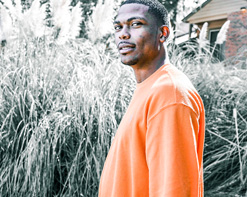 From the outside, Aaron Robinson may seem like one of thousands of hip hop artists in the bustling and vast Atlanta, GA music scene. But if you take a closer look inside, you’re sure to find that Aaron Robinson is, above all, a man with a mission to spread the word of the Lord to an underprivileged, broken-hearted, and corrupted youth. His new single, “365 (Confess His Name)” promotes his original brand of Gospel-Rap, while preaching his message of enlightenment to the lives of an unguided generation.

Robinson himself understands the struggle of growing up in rugged conditions. Originally from the rust belt of the Midwest, Muskegon, Michigan, he was in the heart of the Great Recession as a teenager in 2008. As the working class of the region flailed helplessly trying to find some footing, the youth was left to their own devices. Robinson was the prime demographic for all the negative influences. His father was just getting out of prison around this time, which left him virtually without a strong male figure in his life. Things got worse before they got better, and young Robinson was initiated into a gang, becoming a product of his environment, and in this time, rap and trap music became his only lifeline. Soon enough, his concerned mother made the decision to move their family to Atlanta, away from the madness.

On the way to Atlanta, Aaron Robinson felt an immense release of his soul. He was free. As opposed to Muskegon, Atlanta was a melting pot of influences, which meant the music there was a whole new world for a kid from the recession-ridden midwest. He soon discovered his cousin had a home studio, where he began experimenting with new sounds. One night he went into his Mother’s room and asked her if she had a bible. This night would change his life forever. In a year’s time, he gave up all things in life that didn’t sing true to his new-found journey in redeeming his soul by serving Jesus Christ. Thus, Gospel-Rap artist, Aaron Robinson was born.

Soon enough, he hit the studio and came out with two songs, tracked, mixed, and mastered in 2 hours. He had artistic inspiration raining down on him through his newfound line to the Lord that can be found in his new single, “365 (Confess His Name)”. This entire song was written in just one hour when the holy spirit came through him. “365 (Confess His Name)” is Robinson’s flagship inspirational anthem to kids who are going through similar struggles he endured in his youth.

He is so dedicated to his mission that for the “365 (Confess His Name)” music video he scouted three young teens wrapped up in gangbanging and got them to follow him in worshiping the Lord. In the music video, Robinson is seen sending his message under a streetlight and according to the word of the Lord, “Every Christian is the light of the world.”

We are absolutely ecstatic to be teaming up with such an inspirational new artist like Aaron Robinson to bring you the “365 (Confess His Name)” music video, and are hopeful we’ll see it included in your cherished programming. Don’t hesitate to let us know what we can do on our end to make that happen. Please contact Andy Gesner and the HIP Video Promo team at (732)-613-1779, email us at info@HIPVideoPromo.com.