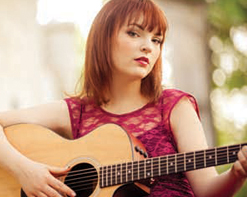 When you have a sensational talent like Abi Ann, it’s hard to not take notice! From her beginnings in the western Texas city of Midland, she has taken her big voice and big dreams at the young age of 16 and has already reached millions of fans across the globe who all agree; this girl is the real deal.

Abi Ann got her start at only 7 years old and quickly found herself in many starring roles in the theater, such productions as Narnia, A Christmas Carol, and the coveted role of young Cosette in Les Miserables. Once she turned her attention to pop and country music, it was apparent that even the Lone Star state wasn’t big enough for her ambitions so it was off to Nashville and LA! The move has proved to be a wise one. She has already had songs placed in feature films and TV shows, she’s performed at legendary venues like Whiskey A Go Go, the Avalon and House of Blues! Abi Ann toured nationally as a part of JNEF’s No Bully National Tour as well as her own DayDreaming tour. She’s also been awarded America’s Favorite Teen Country Artist by the Independent Music Network for 2012 and holds the title of Favorite New Teen Artist by Artists in Music Awards as Country Artist of 2013. All of this has culminated in her new single, “DayDreaming”, which may be the most memorable, mature, and infectious country single we’ve heard in all of 2013!

The video for “DayDreaming” is a lighthearted romp through the highs and lows of young love. The video focuses on Abi quietly reading in the library. And even though she may be playing the part of a studious reader, the reality is she has something else on her mind. Various stylized scenes play out with both happy and somber memories flooding in, and it leads to a connection with the boy across the room from her. The energy is palpable between the two of them, but we have to wonder whether it’s real or if this is just a wishful manifestation of Abi Ann’s “DayDreaming!” Watch this stellar video to find out!

We’re very pleased to be working with Abi Ann and her team to help spread the word about this exceptional young talent and her new single for “DayDreaming.” If you would like more info on Abi Ann, please contact Andy Gesner and the HIP Video Promo crew at (732)-613-1779 or email us at info@HIPVideoPromo.com . You can also visit www.Abi.fm for more info.