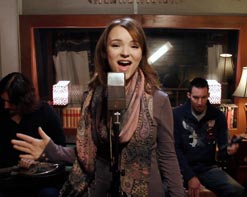 From the artist who brought you “Daydreaming” comes a powerful rendition of “Don’t Let Me Be Lonely” by The Band Perry. Abi Ann has style and grace, and HIP Video Promo is pleased to present you with her new, awe-inspiring clip.

Since her beginnings in the western Texas city of Midland, Abi Ann has been turning heads on the contemporary music scene. She has already reached millions of fans across the globe, proving that this untamed artist is the real deal! From theater performances to pop and country music renditions, Abi Ann is making a name for herself after moving to sunny Los Angeles.

Her music has already been placed in films and television shows, and she’s performed at venues such as Whiskey A Go Go, The Avalon, and House of Blues. Abi has toured nationally as part of JNEF’s No Bully National Tour as well as her very own DayDreaming tour. As America’s Favorite Teen Country Artist, Abi Ann has proved to be this year’s most memorable country artist.

Gearing up for an explosive performance at San Diego’s Epicenter for the It’s Getting Weird tour with IM5 and Above Seclusion, Abi Ann’s newest clip “Don’t Let Me Be Lonely” surprises fans of every genre. The single is a rendition of The Band Perry’s tune, and in the clip, Abi Ann sheds light on her talent and innovation. For an artist as talented as Abi, no special camera techniques or over the top scripting was needed, because just her performance alone is captivating enough to carry any video. Abi and her band perform in a stylish Nashville recording studio, bringing back memories of spots like Sun Studios and Abbey Road, reminding us that the real magic happens when you put a gifted artist in front of a microphone and press that big red RECORD button!

We’re pleased to be working with Abi again and hope you enjoy this delightful new clip. For more information, please contact Andy Gesner and the HIP Video Promo staff at (732)-613-1779 or email us at info@HIPVideoPromo.com /a>. You can also visit www.Abi.fm for more info.