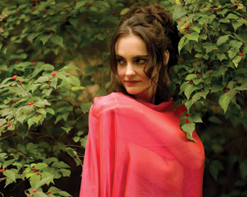 Good day music video pundits! It’s Andy Gesner and the staff from HIP Video Promo coming back at you with an artist with infinite diversity! Abra Moore has released albums on record labels large and small, toured with the Lilith Fair, earned a Grammy nomination for her vocal performances, and placed tracks in movies, television shows, and best-selling video games. But for all her worldly success, it’s the intimate connection that she’s forged with her fans that stands as her greatest accomplishment. Abra Moore’s songs seem like private missives sent from the vocalist to her listener: diary entries, intercepted love letters, eloquent confessions. It’s no wonder that her devoted fanbase treats each new release as a reason to rejoice. In her hometown of Austin, Abra Moore is a legend – and she’s respected and celebrated everywhere singer-songwriter music is heard.

On The Way, her latest release, is her most accomplished and polished yet – eleven sharply-written pop songs, each crammed with minute observations, telling details, and honeybee-sweet melodies. Moore has the voice to deliver them, too: a wonderfully expressive instrument, capable of communicating tremendous emotional nuance and unshakable hope. Surely she can be delicate at times, but she’s no shrinking flower; in fact, as she’s shown on prior releases, she’s just as comfortable singing over electric guitar and drums as she is with sparse acoustic accompaniment. On The Way takes Moore into more challenging territory than she’s ever ventured into before, and her excellent band in unafraid to cut loose behind her.

Daring production choices have often distinguished her recordings from those of other singer-songwriters, and that continues to be true with On The Way. An Abra Moore vocal can feel positively bewitching, and subtle use of reverb and echoing effects often amplifies the strange and beguiling quality of her recordings. On “Sugarite”, a song of memory and longing, Moore sounds simultaneously heartbroken and detached, delivering each note with a near-unearthly precision. She begins her story over an acoustic guitar riff reminiscent of Suzanne Vega’s early work – but by the end of the song, the drums and overdriven guitars have kicked in, and the track becomes a dizzy, swirling reverie. It’s a bold, uncommon sound for a contemporary singer-songwriter, strongly suggesting Moore’s roots in the uncompromising and globetrotting Poi Dog Pondering.

Jack Spencer’s beautiful clip for “Sugarite” feels similarly gauzy and haunted; it’s not quite a fantasia, but it’s pleasantly dream-addled nonetheless. The video opens on a dark country highway – the light intensifies and wanes, and the car appears to be running dangerously close to the edge of the road. Daylight breaks, and we see Abra Moore, dressed in a red shawl and walking slowly through a forest glade. She doesn’t look up at the camera; she’s lost in thought, mesmerized by the scenery and the hypnotic force of her own recollection. Spencer tantalizes us with images that are slightly blurry: every time it seems like the camera is about to focus on Moore’s face, he cuts away to somewhere else in the trees. Black and white footage – many of which suggest flashbacks – are even more iconic and symbolic: a young girl walking through the cover of leaves, a white horse, a gravel road threading through the copse. Then the child has the shawl, and she’s running, too; later, in monochrome, Moore chases her. They catch up in a sunflower patch: bathed in intense sunlight and surrounded by colors that feel too bright to be real, the little girl stares back at the camera, and the singer looks at the little girl.

Big thanks to Sarathan Records and Gary Jay at Land Shark Promotion Studio for brining our attention to this deserving artist and her compelling video! He has also been kind enough to set us up with copies of On The Way for all of your on-air giveaway needs, so if you would like to get your hands on some copies or would like to catch up with Abra for a video interview when she is on tour in June, don’t hesitate to drop us a line! If you need more info call Andy Gesner at 732-613-1779, or email info@HIPVideoPromo.com.