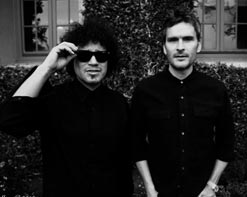 Don’t blink or you might miss another musical offering by the multi-faceted Balthazar Getty. We’ve brought you SOLARDRIVE and The Wow, now he teams up with vocalist and multi-instrumentalist Asdru Sierra of the Latin Grammy-winning group Ozomatli to create cinematic, alternative, Latin-themed jams under the moniker Abstrakto. Join HIP Video Promo as we introduce the incredible video clip, “Marcando Paso.”

After migrating from Mexico, Asdru and his family settled in Los Angles, where he would later meet Balthazar. He realized his dream as lead singer of Ozomatli, making eight records as part of the group, winning two Best Latin Rock/Alternative Album of the Year Grammy Awards, three Latin Billboard Awards, two Alma Awards, a BMI Songwriting Award, and a more recent Latin Spirit Award for humanitarian work along the way.

Balthazar Getty most recently joined forces with LA based rapper K.O. the Legend to create the group, The Wow. Getty has produced pop, dance, and rap music before having a blast shifting his focus to Asdru’s Latin-infused sounds. Asdru and Balthazar met at their kids’ school, leading to Asdru laying down some vocals on the critically acclaimed SOLARDRIVE album that Balthazar produced, which launched Purplehaus Records. Their creative collaboration sparked a friendship and late in 2013, Abstrakto was born in the Hollywood studio.

The video for “Marcando Paso” was directed by Getty and is an enigmatic piece depicting a turbulent love triangle starring both Getty and Sierra debuting on ESTRELLA TV August 21st. An edge-of-your-seat clip, each scene will leave you breathless and panic-stricken. The dangerous love triangle goes every which way, and the tantalizing scenes of “Marcando Paso” leave you wanting more even after the final curtain drops on all parties involved.

For more on this eclectic new endeavor from Balthazar Getty and Asdru Sierra, please contact Andy Gesner and the HIP Video Promo staff at (732)-613-1779 or email us at info@HIPVideoPromo.com. You can also visit www.AbstraktoMusic.com/ for more info.