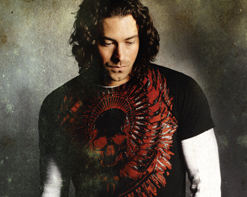 Greetings fellow rockers! It’s Andy Gesner and the staff from HIP Video Promo, here to spread the word about the latest irresistible single from a celebrated American Idol alum. Like all of the AIfavorites, Ace Young knows how to wrap his pipes around a pop song – he made a name for himself on the fifth edition of the show with his empathetic readings of radio favorites. And just like otherIdol stars, clips of Young in action have been circulating on YouTube and other file-sharing sites since his first appearance on primetime TV. Ace Young knows the power of video firsthand: footage of his memorable on-air rendition of “Father Figure” has become a viral smash.

Since the end of American Idol’s fifth season, Young has kept awfully busy – much busier, in fact, than many of the contestants who finished ahead of him on the program. He’s co-written songs for fellow Idol (and good pal) Chris Daughtry’s platinum-selling and Grammy-nominated debut, performed on Total Request Live, acted as an ambassador to the Muscular Dystrophy Association, and even starred in an episode of Bones. But he’s kept his eyes on the prize: a killer debut album. The Colorado singer and songwriter turned down several recording contracts in order to maintain complete control over his work. His decision may have kept his set from getting to store shelves as quickly as other Idols’ have, but patience is a virtue, and we’re pleased to report that Ace Young’s integrity has paid off handsomely. And we know that one listen to his self titled debut will make a believer out of you too.

Don’t get us wrong – the radio-friendly singer hasn’t turned his back on the music industry. The legendary Desmond Child is the executive producer of the upcoming debut, hitmakers Andreas Carlsson and Diane Warren have written for the project, and Chris Daughtry has returned Young’s favor by contributing material to Young’s album. But tracks like “Addicted” are very much Ace Young’s own creation and sentiment, and it shows: his performances are personal and intimate, and have an authenticity that’s impossible to fake. The song is crisply-written, too: it snakes in with a seductive six-string line before exploding into an infectious chorus. Like Daughtry’s work, Young’s pop music rocks – “Addicted” is punctuated by a guitar solo from ex-Marilyn Manson member John 5. Those who’ve waited for a recording from the popular Young – and, judging by YouTube plays and MySpace counts, there are thousands and thousands of them – are bound to be ecstatic.

The clip for “Addicted” feels authentic, too – and it ought to, since it stars Young’s real-life girlfriend. She’s just as comfortable in front of the camera as he is, which is surprising, since the lens loves the American Idol favorite. They make an enticing duo: Young looks the part of the long-haired pop star, and his girl plays the ingénue with genuine enthusiasm. The chemistry between the two performers is palpable, and their protracted love scenes make the “Addicted” clip one of the sexiest videos ever shot for an Idol. Director Spenser Cohen cuts rapidly between footage of Young in performance with his band and shots of the singer in bed (and half-undressed) with his amorous girlfriend. It’s all a blur of action and color, lust, heat, and irresistible compulsion.

Huge thanks to George Pazzo and the whole crew at Pazzo Music for all of their hard work and bringing us on board to be a part of the Ace Young team. They’ve hooked us up with plenty of copies of Ace Young, the debut full length, for your on-air giveaway needs, so please let us know if you’d like to get your hands on some. If you need more info, call Andy Gesner at 732-613-1779 or e-mail us at info@HIPVideoPromo.com .