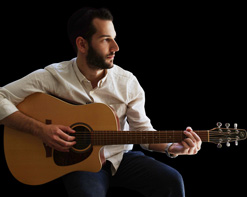 Adam Mishan epitomizes the hard work and determination it takes to become an icon in the ever-changing, demanding world of independent music. We are excited to bring you this musician who is currently slowly but surely taking the music world by storm with his luminous, authentic disposition that translates into a repertoire of music that is proven to make listeners long to work out their vocal chords. With his newest refreshingly sincere and candid jam, “Boomerang,” the pop-rock biosphere of melody is in for a listening apogee with this authentic artist and tune.

Adam Mishan began his musical expedition over a decade ago and claims, unbelievably so, to have started out with little natural talent. Singing out of tune and straining to reach high notes, His high school band encouraged him to go for singing lessons to improve his vocal abilities and after working with some of the greatest vocal coaches in the world once a week for nearly four years, his incredible dedication has more than paid off. So much so that he’s become a respected vocal teacher in his own right and currently helps other vocalists reach their full potential.

Along with spreading his musical know-how to the un-tuned masses, Mishan also spends his time delivering his own personal adaptations of popular songs to his fans on YouTube by posting cover songs within the realm of pop, rock and R&B to help him ripen more as an artist. He corroborated his melodic success by winning first place in NCSY’s Top Talent Live singing competition in 2014. He performs on a weekly basis at various different venues around the GTA. He has composed and recorded seven of his own original songs, the most recent release being the beguiling, pop tune, “Boomerang.”

It’s a breath of fresh air that in an often cluttered, egotistic music industry an artist such as Adam Mishan has the charisma and mindfulness to appreciate the fans that have helped him on his ladder-climb to success. His visually pleasing appearance is on display in the buoyant clip for “Boomerang.” The video shows Mishan and everyday people like you and me casually driving around a Canadian cityscape while jamming out to the swaying, foot stomping hit that is this track. He utilizes this video as an opportunity to represent his weightlessly exuberant musicianship. Just like a boomerang, viewers will keep returning to this incredible artist.

We’re very excited to be working with Adam Mishan on his new “Boomerang” video and are sure you and your viewers will get into it as much as we have and get it into programming venues near and far. We’re here to help make that happen, so please don’t be shy about letting us know what we can do to help! You can find out more by calling us at (732)-613-1779 or emailing us at info@HIPVideoPromo.com. You can also visit www.AdamMishan.com for more info on Adam Mishan.