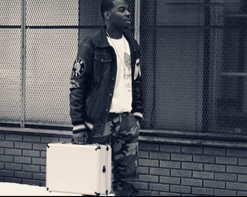 Adero Neely is R&B’s, Hip-Hop’s freshest artist to emerge on the music scene. With an essence comparable to the likes of Ne-Yo, this inspiring musician has an undeniable demeanor. Add a charming and charismatic personality, and you’ve got one heck of a talent. HIP Video Promo is pleased to introduce his crafty new music video “Guap.”

This young artist juggles the same college assignments as other students with a hectic schedule. Packed with photo shoots, piano practice, and dance rehearsals, this Chicago native performer is always busy. Adero’s music hit Chicago’s WGCI and Power 92 radio stations at the tender age of thirteen with his first single “Let’s Go,” which he recorded with the late MC Breed, followed by “Mr. President” at age fourteen, and “Animated” at age Fifteen. To date, he is the youngest solo R&B artist to ever hit Chicago radio rotation in over thirty years! (Michael Jackson)

In September of 2010, Adero’s performance music video “Knight Crawler” was selected by mFlix, an On Demand mobile channel on the Sprint/Nextel network. Adero’s music was also heard at all Six Flags theme parks in the United States, Canada, and Mexico as of August 2010. He made his first music video in 2005, “Save Some World for Me,” which was selected by Swept Away TV. Adero’s music has also been featured throughout various media articles in UNSIGNED music magazine, the Chicago Sun Times, and WORD UP magazine to name a few. He has been the opening act for artists such as Teddy Riley, Arron Hall, Soulja Boy, Tray Songz, Diggy Simmons, and Jacob Latimore. Next to music, Adero has a successful acting career and was the teen star in the popular play, “Work It Out,” where he performed as the major character, Little Tony. In 2013, Adero recently completed a short film “Cut-Out” and a feature film “Like Father Like Daughter.”

This multi-talented rising star shows off his acting skills in his newest video “Guap.” Presented by NDaHoz Entertainment, Adero is the reluctant main character of this crafty, mini-film that involves scenes of seduction, thievery, high-speed car chases and an all-around good time. Even though the lovely bad guys, or should we say bad girls, who are hot on the heels of Adero and determined to get their hands on what he has, he always manages to stay one step ahead. Will he give them the slip? Or will they get their man? Directed by Stunner Reese, Guap highlights Adero’s talents and throughout every scene, the viewer’s find themselves on the edge of their seat. Rich with mystery and charm, “Guap” creates a high-energy clip that will knock your socks off. Above all, the song is incredibly catchy and upbeat. Contemporary hip-hop fans will not be let down with this video that captures Adero in his finest moments.

As a performer, an actor, and singer, Adero Neely is this year’s most talented hip-hop artist. At such a young age, he is making fans from all over excited with his powerful energy and undeniable appeal. For more information on this rising star, please contact Andy Gesner and the HIP Video Promo staff at (732)-613-1779 or email us at info@HIPVideoPromo.com.