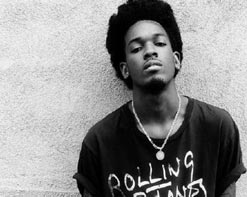 Even though NYC has such a long and illustrious history with producing R&B acts for the ages, Adrian Daniel is on track to become the first Brooklyn-born artist to reach superstardom since Maxwell. His exploration of sonic territory rarely explored in R&B, combined with his unapologetic approach to being who he is at all times, has caught the eye of not only premiere press like Vibe and OkayPlayer, but also the good folks at Tommy Boy Entertainment, who are taking Adrian out of the 5 boroughs and onto the global stage.

It is on this stage that Adrian teamed up with what would be his most important collaboration yet: teaming up with German producer LO for the brand new EP titled F**king High. Upon scouring Soundcloud for new music, LO stumbled upon Adrian’s Native EP and immediately planted the seeds for this winning collaboration. By combining the sultry deliver of Daniel and the otherworldly sounds pumped out by LO, the F**king High EP “packs a punch with a host of sonic influences,” according to Okay Player. The perfect example of this is on the track for “Fool.” Described by Adrian as a song about “loving someone to the point where you lose what matters to you,” it slithers along with a quiet intensity and a sultry energy that paints a perfect picture of romantic friction.

The J-EMZ directed clip weaves a dark tale that focuses on Adrian aimlessly wandering the woods, blindly following his female obsession down every path and around every corner. Even when he thinks he can escape she re-emerges to recapture his soul, as well as the troop of accompanying musicians. As their eyes go black, Daniel passionately sings “I’d jump in the ocean for all your devotion. Cause I’d be a fool for you.” It’s ominous and dark, but incredibly fascinating to watch. If you thought the power of love was strong, allow Adrian Daniel to show you the power of obsession.

Tommy Boy has once again brought us a winner, and we’re certain you and your viewers will agree wholeheartedly. We would love to set you up with anything you may need, including copies of the F**king High EP, to get this video into your programming. Please contact Andy Gesner and the the HIP Video Promo team at (732)-613-1779 or email us at info@HIPVideoPromo.com .