Adrian (and the Sickness) “Take The World” 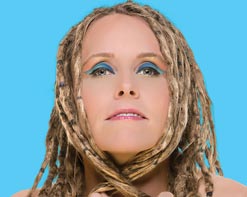 For years, Adrian Conner of Adrian (and the Sickness) has taken the world by storm with her endearing vocals and lively performance technique. However, we are pleased to be following Adrian as she turns over a new leaf in her endeavors as a solo artist. HIP Video Promo is pleased to introduce her newest video clip, “Take the World.”

In 2008, Adrian’s melodies as well as her scalding six-string guitar caught the attention of fellow Austin resident Kathy Valentine, who is known as the bassist for the Go-go’s. Valentine thus produced Adrian’s fourth album B.F.D. in 2009, which was released under Adrian’s own label, Fantom Records.

Since 2004, working as a full band, Adrian and The Sickness has been wowing audiences with sweet melodies and sheer sonic power. Nevertheless, after rebranding Adrian (and the Sickness) as her solo project, Adrian’s career has been described as “a sure hand with a stinging riff, and she’s demonstrated her talents.” This formidable pop-rock songwriter creates honest and forthright songs that are filled with catchy, irresistible hooks. Check out what Guitar Player Magazine called “exciting, rambunctious, and kinda scary” in her latest clip, “Take the World.”

Adrian Conner is untamed and commanding in “Take the World.” The tune is consistent and Conner’s kinetic performance is timely. With roots centered around 90’s alternative, the song captures love in it’s brightest light, watching one man’s escape from his darkened existence towards the bright light that Adrian is projecting. It’s a creative combination of some very basic cinematic techniques combined with some tasteful computer graphics. “Take the World” is an ode to what Conner has achieved throughout the past decade—creating and releasing seven studio albums!

With a fifth full-length studio album Be Your Own Savior, Adrian Conner has nothing but success in the stars and HIP Video Promo is nothing but excited for what Adrian has to offer the contemporary music scene! For more information, please contact Andy Gesner and the HIP Video Promo staff at (732)-613-1779 or email us at info@HIPVideoPromo.com . You can also visit www.AdrianConner.com for more info.