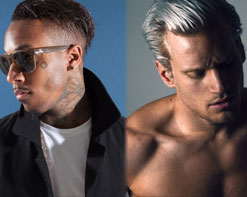 Collaborations in the music industry have always produced some of the most memorable, well-executed gems that cross not just fanbases, but entire genres. “Under Pressure” by Queen and Bowie. “Say Say Say” by Michael Jackson and Paul McCartney. Even in 2015, Diplo, Skrillex, and Justin Bieber teamed up for the surprise hit “Where Are Ü Now.” That brings us to “Monday Morning,” a ridiculously exciting collaboration between Alex Alexander and Demario SB that blends genres and styles for a track that casually and playfully swings throughout the sonic spectrum. “Monday Morning’s” slick production, spectacular singing / rap performances, and memorable pop / reggae infused beat make this a radio-ready track with real crossover appeal.

When the two were brought together under the tutelage of Revolution Entertainment, the chemistry was instantaneous as they combined their different worlds into one resounding voice. Alex Alexander is a Swedish pop/rock/electronic solo recording artist and guitarist that has professionally played all over Asia, the Middle East, and Europe starting at the age of 19. As a crossover artist, Alex has already managed to earn great attention and awards from the industry for his songwriting and producing skills. Demario SB is an Independent Artist / Song-Writer and Entrepreneur. As founding member of AYB (Ambitious Young Brothaz), Demario fine-tuned his craft on the journey to pursue a solo career. He creatively fuses music in genre’s as diverse as: HIP HOP, POP, ROCK, R&B, and EDM and has worked alongside and performed with a plethora of artists such as Cali Swag District, Too Short, Houston, T. Mills, The Game, Warren G and Tyga.

The video for “Monday Morning” is upbeat and party-ready jam. The lines between party, morning after, and pre-gaming for the next party are blurred as Alex and Demario wake up in a daze with unfamiliar bedmates. They reconvene on the patio to try to put together the pieces of exactly what happened the night before! A few flashbacks drop hints about what happened but the details are foggy. As they gather their thoughts and their possessions they decide it’s time to make a clean break, but somebody else in these beds might have different ideas!

With stylish shots interspersed of Alex and Demario performing their respective parts of the song, the package is complete and wholly satisfying. This irreverent clip is exactly what we need on these gloomy winter days and we’re confident you and your viewers will dig right in! Please contact Andy Gesner and the HIP Video Promo crew at (732)-613-1779 or e-mail info@HIPVideoPromo.com . You can also visit http://www.rev-ent.com/http://www.AlexAlexanderlive.com/ and https://twitter.com/URALEXALEXANDER/ for more info.