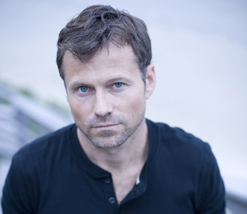 Greetings fellow music video lovers! It’s Andy Gesner and the tireless staff at HIP Video Promo bringing you another captivating clip that will surely please your senses. Working at HIP gives us a front-row seat at the transformation of the music industry. Over the past five years, we’ve gotten to watch independent artists harness the power of new technologies for recording, promotion, and distribution. Musicians who, in prior eras, would have been left waiting at the gate have found mass audiences through the Internet. Alex Woodard is a successful songwriter and true independent who has achieved modest success on his own initiative – but a new partnership with a popular social-networking site looks likely to turn his latest single into an international smash. On its own, “Beautiful Now” is a warm and empathetic ode to motherhood; as the theme song for the inclusive and affirming Hot Moms Club (www.hotmomsclub.com), it’s unstoppable.

We’ve called the singer’s relationship with the social network a “partnership”, but really, that makes it sound dry, corporate, and businesslike, and nothing about the HMC – or Alex Woodard himself – is dispassionate. Hot Moms Club co-founder Jessica Denay has been a fan of Woodard’s engaging country-rock for years, and her decision to ask the San Diego singer for a theme song for her site was prompted by genuine affection and camaraderie. Since its launch, the HMC has been featured on the Today show, CNN, and in countless magazines – and whenever the Hot Moms Club is discussed in the major media, “Beautiful Now” provides the soundtrack. On the much-visited HMC website, a banner ad takes the visitor straight to the Alex Woodard website and the “Beautiful Now” clip.

It’s a remarkable change in profile for a low-key singer-songwriter with an approachable and fan-friendly demeanor. Woodard is, however, hardly unknown: his husky voice and starkly beautiful, heartfelt songs have made him a regular on the California folk-rock circuit. Renowned for his storytelling, Woodard has released four enthusiastically-reviewed sets collaborated with Pete Droge, worked with Joe Bass of Sunny Day Real Estate and The Posies, and even made a cameo appearance in the most recent Carrie Underwood video. “Beautiful Now” is the first single release from his long-promised followup set to the lauded Up With The Sun; it’s here to hold us over until the album drops in August.

But “Beautiful Now” had to be out in time for Mother’s Day. The Hot Moms Club’s theme song is an anthem of empowerment for women who’ve had babies, and an effective advertisement for the social network. Several big-name stars have signed up to participate in the HMC effort – which also includes a handbook, a news service, magazine, a weblog, and several community outreach programs. Former Miss Universe Dayanara Torres chairs the Hot Moms Club’s Spanish-language efforts, and she’s been a high-profile spokesperson for the organization. No surprise, then, to see Torres’s comely face and stunning body in the “Beautiful Now” video; appropriately, she’s brought along her two children, too. We watch them jumping on the bed together, walking on the beach, eating fruit salad, playing air guitar – it’s some of the hottest-looking “family time” imaginable! Models Cindy Margolis, Chantelle Rivera, Genevieve Chappell and others (all HMC club members) have brought their kids to the shoot, too. It’s all quite wholesome, but it’s jaw-droppingly gorgeous to look at, too – which, come to think of it, is precisely what the members of Hot Moms Club and Alex Woodard are trying to say.

Many thanks to Kristen Worden-Harris and the crew at Croshal Group for having us be a part of the Alex Woodard team. They’ve hooked us up with plenty of Alex Woodard goodies so please don’t hesitate to be in touch if you’d like to get your hands on some for on-air giveaways. If you need more info, call Andy Gesner at 732-613-1779 or e-mail us at info@HIPVideoPromo.com . You can also visit www.CroshalGroup.com or www.AlexWoodard.com to find out more about Alex Woodard.