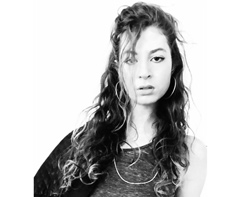 One of the formative moments of Alexandra’s career was when an English teacher once said “Artists like you are always a little strange and unconventional.” As an aspiring musician desperate to escape the same ten-song radio rotation of her small hometown in New South Wales, this was a true compliment and motivated her to pursue her goals, but on her own terms. With her new single “Criminal,” she takes familiar ingredients and stirs them together into something new using nothing but her own hard work and creativity.

She pulls her inspiration from classic such as AC/DC, Michael Jackson, and Pink Floyd, all the way through the artists who inspired her at her first live concert, the legendary Big Day Out. There she was able to see artists like Beyonce and The Red Hot Chili Peppers perform their craft in the flesh.

Though she had her hands in many areas of the art world, it has always been music that inspired her the most. The fire burns bright for her, and inspiration seems to attract itself to her like a moth to her flame. For the new single “Criminal” it was a distant gunshot in the night that stirred a melody, ad-libbing around that melody, eventually becoming the chorus of the song. With the help of award-winning producer Keith Olsen, Alexandra has turned “Criminal” from a simple demo into an energetic song that comes alive, breathing life into any room its sound fills.

“Criminal” is an unapologetic track and video that flies in the face of convention. As she rips through a blistering juxtaposition of a hard rocking, electro-tinged backbone and a fast, fiery vocal delivery Alexandra absolutely owns the camera. The gritty video incorporates a plethora of visuals that perfectly match the unrepentant vibe of the song. Static prevails, urban cityscapes pop, failed film reels roll in and out of frame, and haunting visuals of the night all set the scene. Ultimately, however, Alexandra is the focal point of this clip, as she locks eyes on the camera lens, her intensity burning through the screen and piercing deep into the core of the viewer.

Thought provoking and not subtle in its nature, there is no denying Alexandra’s music has an edge and element of risk that she believes to be mostly missing in music today. We’re confident you and your viewers will agree, so please do let us know what we can do to get this video into your programming. Please contact Andy Gesner and the HIP Video Promo staff at (732)-613-1779, email us at info@HIPVideoPromo.com.