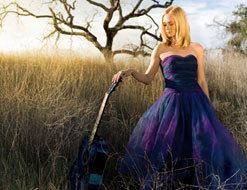 Greetings programmers, we’re excited to bring you this easygoing upbeat clip from a young and stirring songstress to snag up your heart. Out of the glamorous city of Los Angeles, California, the city of angels and exceptionally talented singer-songwriters, comes an indie rocker who is as charming as she is delicately graceful in her craft. Allison Geddie delivers the tuneful acoustic number “Fixing Me”, produced by Aaron Dudley. The key to Allison Geddie’s style is that she draws in her listeners by taking familiar roads and then unexpectedly changing direction and melody to leave a fresh and lasting impression.

The song is tastefully packaged along with a music video that finds Allison taking on every image imaginable as she tries to impress a guy at a show where her “other self” is performing. Some of the get-ups are pretty ridiculous and it’s easy to tell Geddie had as much fun making the video as a viewer will when watching it. Of course, she ends up realizing that being herself is the most important thing in any relationship, while the viewer realizes that Geddie is absolutely adorable and that the song is already stuck in their head.

“Fixing Me” is one of the leading tracks from Geddie’s debut albumEverything You Don’t See, produced by Greg Critchley, which is full of songs that intend to thoroughly question the meanings of life. Allison Geddie means to make music that tugs at the heart strings in the way that Alanis Morissette, Jewel and Sarah McLachlan did in the 90’s, something that’s often lost in pop songs today. The record has already generated buzz amongst the critics, earning Geddie an “Artist of the Month” highlight on Stereofame.com and a feature/interview on MSNBC.com. Girls Life magazine raves “If Norah Jones’s sultry voice and Sara Bareilles’s lyrical honesty were combined to make an album, it would be Everything You Don’t See.” Allison Geddie’s music has also been featured on ABC’s All My Children, The View, and One Life To Live, and has earned her opening slots for Blue Öyster Cult. Allison is also currently hosting a live Stickam show titled “The Green Room Live,” which has reached hundreds of thousands of viewers.

We are thrilled to be spearheading the exposure of an honest and promising new talent like Allison Geddie and hope that you will find “Fixing Me” a warm addition to your lineup this winter season. We’ve got plenty of copies of Everything You Don’t See to fulfill all of your giveaway needs. You can also visit www.AllisonGeddie.com to find out more about Allison Geddie.