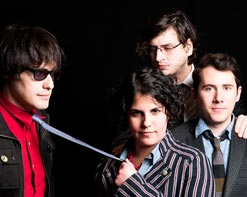 Boston’s Aloud sums themselves up pretty succinctly with their description “four piece rock n’ roll band with lots of hooks, lots of harmonies, lots of guitars, and lots of heart.” Of course the musical elements are apparent from the first note of “A Little Bit Low,” the dynamic new single from their fourth album, It’s Got To Be Now, released on Mother West.

Perhaps the most important part of the equation, however, is that they have lots of heart. Lots of bands can write rock n’ roll songs, but few can deliver them with the ferocity and conviction of Aloud. Lead by co-fronts Henry Beguiristain and Jen de la Osa, and rounded out by Frank Hegyi and Charles Murphy, the band unleashes an all assault on the senses that cannot be fabricated or phoned in. Rock n’ roll has been an institution for generations of fans, and the only way to rise above the rest is to give not 100%, not 110%, but somewhere north of 125% and to leave everything on the stage. Now, you may be wondering about the questionable math in that equation, but just trust us, once Aloud starts math won’t matter, nor will science, nor grammar. The only thing that matters is rock n’ roll.

And with “A Little Bit Low” that is exactly what we get. The video begins with the classic image of the needle about to hit the vinyl, surely a sign of good things to come. The song immediately launches into a blistering jam with pulsating leads and de la Osa belting her voracious vocals over top. The video rotates around two females in the same apartment, showing the juxtaposition of their preparation. While one lady spends a seemingly endless point of time in the bathroom getting ready for her corporate gig (we’re taking hours to try to make that pants suit look just right) the other is impatiently lounging and biding her time in the apartment. She goes through the vinyl, cooks up a small meal, lights up a few smokes, and desperately tries to entertain herself. It’s a great visual, and the mannerisms between the two really exhibits the differences in their approaches. Check it out for yourself and see what you think!

Please contact Andy Gesner and the HIP Video Promo crew at (732)-613-1779 or email us at info@HIPVideoPromo.com for more info on Aloud.