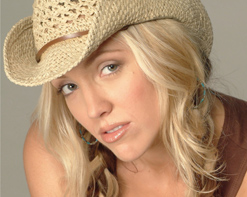 Greetings fellow music video lovers, it’s Andy Gesner and the staff from HIP Video Promo coming to you with a touching new video that is sure to tug on your heartstrings. New York City buzzes with the sound of talented musicians who’ve come from the Midwest to make their name under the stagelights. Few, however, are as sweet and uncorrupted – or have stayed as true to their roots – as Amber Rhodes. She calls Brooklyn her home now, but this grand-daughter of a country singer first answered the call to pen her own music in her hometown of Lexington, Kentucky. She fits right in with the folk-rock and Americana revival currently taking place in Kingsborough, and is a fixture on the independent club circuit. But there’s very little “alt” in her country; the hipsters may love her, but her traditionalist stance isn’t a pose. The 25-year-old singer grew up listening to Nashville classics, and lists Shania Twain and Dolly Parton as major influences. There’s nothing calculated about Rhodes: she’s giving it to you straight from the heart.

And she can hold an audience spellbound. This October, Rhodes wowed the crowd at the Evolving Artist TV Awards in Massachusetts; following that triumph, she returned to the small clubs of Gotham for more intimate engagements. Drawing from a songbook that includesGoodbye Yesterday, her latest release, Rhodes spins out stories of heartbreak and longing, hope, and redemption. She’s got an eye for telling, poignant details: many of her songs turn on keen observations of the lasting effects of the passage of time on people’s lives. Written by Rhodes and songwriter Hugh Colocott in Brooklyn and recorded by the Stray Dog production team in Lexington, Goodbye Yesterday is a majestic fusion of country grandeur and pop accessibility.

The “Goodnight Lullaby” video is a kind of “Cat’s In The Cradle” for the 21st century: a look at a mother-son relationship as it stretches from cradle to grave. Rhodes’s stirring performance (her vocals here, are as always, powerful and pitch-perfect) makes the filial love feel palpable and irreducible. This is a country ballad for sure, but there’s nothing maudlin or emotionally manipulative about it. Like everything else on Goodbye Yesterday, “Goodnight Lullaby” feels honest, direct, and unvarnished.

Maura McEvoy’s fashion and editorial photographs have been published in Martha Stewart Living, Town And Country, Food And Wine, and in scores of other high-profile magazines. Like Amber Rhodes, she’s a storyteller with a knack for capturing emotional content. She brings her photographer’s sensibility and a very personal cinematographic style to her artful clip for “Goodnight Lullaby”. McEvoy’s camera loves Rhodes: the young country singer appears radiant and winsome, and maybe even a touch glamorous! But both the musician and the director are in love with narrative – so it’s the dramatization of the story that gets the most screen-time. We watch the main character as a young mother with her son in her arms; later, she’s older, and he’s “16 going on 34”, and driving away in a pickup truck. Finally, she appears as an old woman, and, as her boy sings the lullaby she once taught him, she slowly fades into the farms and country roads of upstate New York.

We had our first introduction to Amber Rhodes several months ago and we are very excited that Erik Steinert and all of the good folks at Stray Dog Music have brought us on to be a part of her promotional team! We have plenty of copies of Goodbye Yesterday available for all of your on-air giveaway needs, so don’t hesitate to be in touch. If you need more info, call Andy Gesner at 732-613-1779 or e-mail us at info@HIPVideoPromo.com. You can also visit www.AmberRhodes.com to find out more about Amber Rhodes.