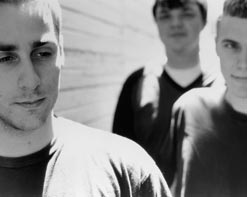 On paper the career of American Football initially comes across as slightly underwhelming. One 3-song EP, one full-length record, a few shows throughout the midwest, and then that was it. The band called it quits in the early 2000’s. But the story of American Football is really what happened in the 15 years since the release of their self-titled full-length and their subsequent breakup. Guitarist Mike Kinsella went on to become one of the most formidable voices in the indie rock scene through his involvement with bands like Cap’n Jazz, Owls, Joan of Arc, and especially his solo work under the Owen moniker. Drummer Steve Lamos formed DMS before reuniting with guitarist Steve Holmes in their short-lived project, The Geese.

Most importantly, perhaps, is the influence this band has cast on not only their contemporaries of the day, but also a slew of artists leading the so-called “emo revival” exploding across the US with bands like Into It. Over It., Touché Amoré, Prawn, and virtually the entire Topshelf Records roster. American Football is regularly cited as a primary influence on many of these bands.

In all this time Polyvinyl Records has been conscious of the band’s legacy and has served as terrific caretaker, selectively reissuing American Football on vinyl, as well as a 1-sided 12″ EP of the original EP. The band was brought to life once more upon Holmes’ discovery of a set of cassette tapes containing a variety of unreleased live recordings, demos, and practice sessions (in which the group rehearsed material they never recorded elsewhere). Once again, Polyvinyl offered just the right touch, releasing a deluxe edition of American Football with beautifully expanded packaging.

One of the most memorable elements of the lone LP was the influential album cover and artwork of Chris Strong. For their new video of the classic song “Never Meant” the band once again enlisted Strong to recreate his striking imagery in a video form. The ever-mysterious members appear for a few seconds in the beginning of the video, but the thrust of this video revolves around the minimalist and honest video of a couple as they deepen their bond at parties, in the woods, even in front of the original house from the album cover. Through good and bad, they capture these moments with polaroids that make their way into a montage on the fridge. They’re a reminder of the good times, even when things don’t work out the way we wanted them to.

We’re incredibly excited to be a part of the American Football team and to be working with the Polyvinyl crew to bring back one of the greatest bands of our generation. For more information please contact Andy Gesner and the HIP Video Promo team at (732)-613-1779 or email us at  info@HIPVideoPromo.com . You can also visit www.PolyvinylRecords.com for more info on American Football.