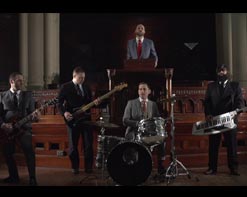 Brooklyn sci-fi rockers American UK travel through time to save rock ‘n roll. This Brooklyn-based rock band records their adventures as dance-rock hits and comic book and graphic novels. Join HIP Video Promo as we journey into the realm of Americans UK with their artistically gifted video clips, “Hostile Takeover” and “Lights Out In Zap City.”

What began as a garage rock-punk band in 2000 has turned into a science fiction and fantasy collaboration. Americans UK have constantly updated their sound, emphasizing danceable rock tunes, exciting shows, and fantastic costumes. They are also known for their multi-media web comics, lyrics videos, and now, epic live-action clips. They’ve released a multitude of albums, EPs, and singles over the years including the I, Ape-Man EP released in 2003, followed by the punk-western single “John Loves Wayne.”

Albums such as Rocktronic, Luxuria, and their web-only release of “Live From Another Dimension” in 2012 have led Americans UK to the release of their newest album Where Giants Walk, in which each single will be released as a music video this year! Also known for their graphic fiction including the ongoing graphic novel anthology series Rocktronic Mixtape, Americans UK create multimedia web-comics and their comic book music videos, such as “Zombies Attack!!!” and “Sons of Ba’al.”

Kicking off Where Giants Walk is the video “Hostile Takeover.” In this David Bowie-esque clip, Americans UK present viewers with sci-fi themes and tantalizing scenes. Following a captivating storyline in which the audience gets a HBO’s True Detective sacrificial vibe, the song tells nightmarish tales that are all in good fun. “Hostile Takeover” creates enigmatic feels and shows the world just what Americans UK are fighting for—rock n’ roll!

Their second clip “Lights Out In Zap City” is the second single off of the band’s highly anticipated album Where Giants Walk. Director Darin Murano sets the scenes as Americans UK battle drones in this dance-hit of the future. Produced in bedrooms throughout Brooklyn, New York, “Lights Out In Zap City” is a testament to the modern ability of do-it-yourself projects and a good use of consumer technology to create professional music and videos at home!

For more information on this exceptional experiment in audio and visual creativity, please contact Andy Gesner and the HIP Video Promo staff at (732)-613-1779 or email us at info@HIPVideoPromo.com .