Amo Amo “Closer To You” 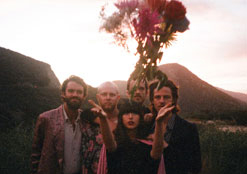 Amo Amo’s music radiates an inner light. Their glow caught the ears of Jim James (My Morning Jacket) who fell in love with their sound and produced their debut album. “Closer to You” is one of the first singles from the forthcoming album; it has already racked up over 400,000 streams on Spotify and has been on steady rotation on LA’s tastemaker radio station KCRW. Simply put, Amo Amo’s dreamy, psychedelic indie pop sound is vibrant and irresistible.

Amo Amo doesn’t show off, but even when the band is at its subtlest, the musicianship is stellar. These are artists who know how to turn a simple musical gesture – a guitar line, a countermelody, a cross-rhythm, a sonic effect – into something unforgettable. The group has also been graced with a singer of uncommon poise and flexibility. Love Femme draws in equal measure from modern pop, folk and psychedelic rock, and her performances are suffused with an unearthly radiance. In addition to being in this psychedelic pop-rock band, she’s also performed in New York’s Living Theater.

Though Amo Amo is a new project, the world is already starting to take notice – and anticipation for the full-length is building. Lead single “When We’re Gone” was featured in a “Today’s Top Tune” post on the KCRW website, and Savage Thrills lauded its “quintessential beauty”. “Closer To You” is the follow-up, and it’s building on the momentum generated by “Gone”: Culture Collide called it “sonic bliss”, and Paste Magazine praised the performances of the instrumentalists. In a demonstration of the band’s versatility, Amo Amo has already opened shows for Brazilian pop masters Os Mutantes, acclaimed Ethiopian soul artist Hailu Mergia, and Californian folk-rock singer-songwriter Jonathan Wilson. There are plenty of great shows on the horizon, too.

The clip for “Closer To You” prominently features Love Femme, and that’s appropriate, since she directed it herself. But the other members of Amo Amo make their presences felt: they’re the faces in the flowerbed where she frolics, and the voice of the land she walks on. Love Femme has included some gorgeous Southern California scenery, too, including a dramatic cliff overlooking the Pacific Ocean. This is a playful clip, for sure — but it’s one with genuine spiritual overtones.

Here at HIP Video Promo we’re delighted to be working with Amo Amo, and hope you embrace the new clip for “Closer To You” as much as we have. We’d be thrilled to see this video added to your cherished programming and online presentations in a timely fashion. Rest assured we’ll have plenty of Amo Amo merch available for on-air contests and giveaways so don’t hesitate to get in touch if you’d like to get your hands on some. For more information on Amo Amo, please contact Andy Gesner and the HIP Video Promo team at (732)-613-1779 or email us at info@HIPVideoPromo.com. You can also check out www.amoamomusic.com for more info.