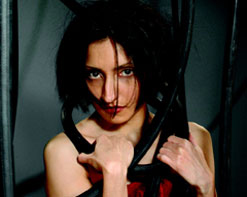 Hello everyone! It’s Andy Gesner and the staff from HIP Video Promo with another intriguing video completely worthy of your attention. Today, we’re proud to be continuing our work on behalf of two artists who we’ve become pleasantly familiar with: disturbing-visionary video director Dan Ouellette, and Shikhee, better known as Android Lust. You probably remember Android Lust from the beginning of 2005 when we sent you the disturbing video for “Stained”. Devotees of darkwave – that intriguing brand of electronic music, heavily influenced by Nine Inch Nails, halfway between traditional synthpop and experimental industrial music ­– already know Android Lust well, and have madeDevour, Rise, and Take Flight perhaps the most heavily anticipated album in the history of the genre. Shikhee has proven herself the perfect successor to Trent Reznor: a singer, instrumentalist, beat programmer, and songwriter with an unerring sense of rhythm and sonic texture, a flair for the darkly dramatic, and a taste for primeval and existential horror.

But anybody who thinks they know what’s coming on Devour, Rise, and Take Flight is in for a pleasant surprise. Here is the most accomplished and the most wide-ranging Android Lust release yet – one that introduces a new sophistication into the songwriting, but sacrifices none of the project’s intensity or delicious creepiness. Shikhee’s production has evolved and broadened, and it now incorporates elements from genres of electronic music from ambient to trance to radio pop. Lyrically, her fascination with the human body and its frailty has only deepened – and her rage and defiance has never been articulated with more force.

“Dragonfly”, the lead single from Devour, Rise, and Take Flight, communicates some of this newfound poise. It’s a pulsing, unsettling, finely-textured piece of machine music, bristling with subdued energy and a mechanical grace. Shikhee has mastered the industrial deejay’s technique of distorting and muffling the vocals on a fuzzed-out chorus: it evokes desperation, suffocation, electric sweat. Her vocals are, as always, smooth, unearthly, and sensual, even when she pushes herself to the breaking point.

We’re shown Shikhee in a glass cage – perhaps she’s been imprisoned, or perhaps she’s on display in some kind of hyperstellar zoo. Around her head is a hood reminiscent of a venus flytrap; she wears a flowing orange dress that covers tubing that spreads from her waist like the legs of an arachnid. The tubes draw water from a shallow, roiling pool at her feet, as she stalks the floor in frustration. She pounds the walls, tears at the glass, and sings to the ceiling – but she’s alone, and her cries for recognition aren’t heeded. Finally, she tears the tubing from her waist, pipe by slithering pipe. She pulls the final conduit from her body as the song ends – and collapses, lifeless, to the smoking floor.

Here at HIP we are thrilled to be teaming up with Projekt Records to bring you the latest video from visionary Android Lust. We have plenty of copies of Devour, Rise, and Take Flight, so please don’t hesitate to get in touch! If you need more info, call Andy Gesner at 732-613-1779 or e-mail us at info@HIPVideoPromo.com. You can also visit www.Projekt.com orwww.AndroidLust.com to find out more about Android Lust.