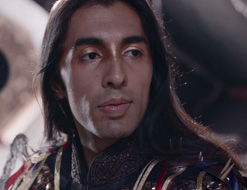 Greetings fellow music lovers, it’s Andy Gesner and the HIP Video Promo staff coming back at you with another video from an artist we are proud to champion and call one of our own! Ankit Love returns in massive way to topple all expectations out of the Earth’s atmosphere, in the most literal sense. The singer’s last video for “People Are My Favorite Thing” found Ankit dashing and dancing through the streets of London, but this time the stakes are much higher. “Beethoven Burst” finds Love cast as an interplanetary space commander in search for the cosmic holy grail, with a crew of hot (and barely clothed) bombshells at the controls. The video mixes ideas of faith, imagination, love, Star Trek, and The Sistine Chapel all into one Hollywood movie-like production that anyone with a pair of eyes and ears will definitely not want to miss. After witnessing this bizarre, yet completely awe-inspiring spectacle, we are certain that Love could be our generation’s Ziggy Stardust.

Earlier this year we brought you the video for his debut single, “People Are My Favorite Thing,” which had been featured in World News and was well received on every level. The song introduced listeners to a more exotic musician who isn’t afraid to release elemental ideas into the melodious, and somewhat monotonous, structures of indie music. With a harmonious blend of funk and pop elements, the smooth melodies contained in his songs evoke a feeling of heartwarming happiness. This unique and fresh vibe has been resonating with audiences all over the world rather explosively, as the “Beethoven Burst” music video raked in nearly 35,000 views on YouTube in just 3 days since it was posted. The clip is also the 62nd most viewed music video in the UK and rising, which is a huge feat that most new artists never get to experience until later in the record cycle.

It’s hard to ignore the calmness and eclectic feel of “Beethoven Burst”—the new video from Ankit’s new album Forever. While “People Are My Favorite Thing” was an organic journey through everyday life celebrating the people who end up making the world what it is, “Beethoven Burst” is a nothing short of being an out-of-this-world journey! The subtle, yet clearly scientific formality of the storyline preoccupies the mind, giving meaning to the idea that Ankit Love’s music contains its own scientific formula. The video can be compared to certain funk vibes from The Red Hot Chili Peppers, and can even be considered a more meditative, yet still productive version of the song, “I Believe In A Thing Called Love” by The Darkness, complete with spaceships, special effects and even an intergalactic orchestra! Ankit Love lays down his melodies and funky rock groove over samples of Beethoven’s 5th Symphony spiraling through the mix.

“Beethoven Burst” provides sanity for those of us who feel unsure of fate and the vastness of the universe. Ankit Love combines ideas revolving around the elements of the earth, space, and the uncertainty of our own quests in order to bring his viewers to the point of no return. The video stars the unforgettable Latvian actress, Egija Zviedre, who is the lead and love interest in this short, musical film. Together, she and Ankit Love respectfully join. The video promotes a change in humanity through the power of love, and with that, HIP Video would like to leave Ankit Love’s heart in your hands through the introduction of “Beethoven Burst.”

We’re thrilled to once again be working with Ankit Love to bring you this exceptional and ambitious new clip. If you’d like to check out the complete video, with a full storyline and more, check it out on YouTube to dive even deeper into the story of “Beethoven Burst.” We’re happy to hook you up with copies of Forever for your on-air giveway and listening needs, so please don’t hesitate to be in touch. If you need more info, call Andy Gesner and the HIP Video Promo crew at 732-613-1779 or e-mail us at info@hipvideopromo.com. You can also visit www.Facebook.com/AnkitLove to find out more about Ankit Love.

For info about Ankit Love’s “People Are My Favorite Thing” video, click HERE