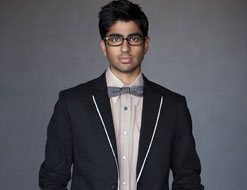 Hello programming brothers and sisters! It’s Andy Gesner – your source for all that is music video goodness, along with the rest HIP Video Promo crew. We’ve got a very exciting shiny new clip coming your way from none other than the American Idol finalist Anoop Desai! If you’re like us, and keep up with one of America’s most popular television shows of all time, then you should know by know that Anoop was one of the leading contenders on Season 8, which has just aired a year ago. Desai proudly emerges back into the ears of his many followers this year from his song “All Is Fair (Crazy Love).” You should know, this song is not just “fair,” it’s bloody fantastic!

As a finalist on American Idol, it should be no surprise that Anoop Desai has one hell of a voice! This Idol star did not just climb over many of his peers with just his looks and style – he’s got actual talent. “All Is Fair” shows off those smooth vocal chords within the format of a radio ready hit. Aiming his sights on a mix between Usher and Justin Timberlake, Anoop finds his own sound and butters his listener up with all the sweet and tasty hooks of pop. The song deals with the unpredictability of love and its dangers.

The video, which made it’s big debut recently on Billboard.com, takes the concept of the song literally and places our young and lovable singer at the mercy of a ruthless girl who tries to shake him off this mortal coil in every chorus! Every time the track’s blazing chorus lights up the soundscape, the beauty attempts to kill Anoop by shooting him, lighting him on fire, and other such romantic gestures. The video gloriously concludes with Anoop’s demise and resurrection as ghost wearing the sharpest suit on this side of heaven. The camera work in this clip is top notch, with the stylish singer always at the center.

“All Is Fair (Crazy Love)” is off Anoop Desai’s debut album All Is Fair. The album debuted 14 on the iTunes pop chart and is poised to climb even higher with this high profile release (we’re sure Anoop’s 44,514 Twitter followers will agree), which was recorded after finishing a major United States tour. Anoop has employed the musical magic of Grammy Nominated Producer/Engineer Ian Schreier (Gnarls Barkley, Velvet Revolver, Obie Trice, Big Pun, and Mystical), and co-wrote and produced a number of the tracks with his close friends Josh Hoge, Zach Crowell, David Mikush, and Brandon Rogers (American Idol). He’s also made some very high profile television appearances lately, such as Ellen, Regis and The Mo’Nique Show! Be sure to jump on this fast moving bandwagon and help this much deserving star get his wish (you’ll be in the company of such celebrities as Ellen DeGeneres and Keith Urban).

We are super thrilled to be part of this high profile campaign and hope you will join us in broadcasting this outstanding and chipper clip. We’ve got tons of Anoop Desai stuff here for giveaways, so just give us a holler to get some sent your way! If you need more info, call Andy Gesner at 732-613-1779 or e-mail us at info@HIPVideoPromo.com.