Antennas Up “I’ll Be Home For Christmas” 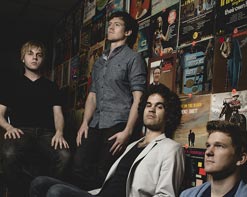 When we last brought you Antennas Up they were presenting us with the mind bending clip for “The Awkward Phase,” which combined wild visual editing and a blast of every stop on the color palette. This after the first clip for “Coming On,” which featured a man in a horse mask running amok through the streets of Kansas City and crashing a photo shoot with sexy ladies and a wealth of balloons and confetti. It’s pretty clear that Antennas Up is a band that does things in their own unique way, and for their new video “I’ll Be Home For Christmas” they take the traditional spirit of giving and happiness and turn it on its head!

As we stroll into our favorite shops and restaurants this season, we will inevitably be bombarded with uplifting songs about yuletide cheer, delicious eggnog, gifts aplenty, and a magical glow that will encapsulate the population. But much like the Grinch, there is always the dark side of the holiday and those who are intent on ruining it! In their new video for “I’ll Be Home For Christmas” Antennas Up puts the clash between the two front and center!

The video starts with a curious little girl sneaking down on Christmas Eve trying to get an early peak at what Santa brought her. In a frightening twist she quickly learns that what is inside the box is not a present she wants to open. Her parents are nowhere to be seen and soon the piercing eyes and the fangs erupt out of the box, shattering the serenity of this quiet suburban home. She retreats from the living room and regroups in the kitchen, arming herself with her sturdiest spatula and strainer helmet. She erupts out of the kitchen and fights off the monster in the room, forcing it back up the chimney, and saving the sanctity of Christmas for all. Or did she…….?

We are very excited to be working with Antennas Up once again to bring you this quirky clip. It is another feather in their cap and gives you and your viewers a unique way of ringing in the holidays! We’d love to get you anything you need to include this video in your programming, so please hit up Andy Gesner and the HIP Video Promo crew at (732)-613-1779 or email us at info@HIPVideoPromo.com .