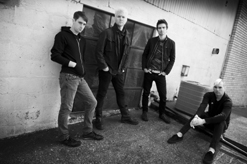 Label:
SIDE ONE DUMMY RECORDS
Video:
“WHEN ALL THE LIGHTS GO OUT”
Directors:
Thom Glunt
Add Date:
August 31, 2009

Hello programmers! It’s Andy Gesner and the HIP Video Promo staff, asking you: what’s the iconic significance of a bonfire? The flames are destructive, sure, but it’s also a place for cleansing – for getting rid, forever, of past possessions and former fetters. A bonfire is celebratory: it’s a signal and a marker, a beacon from above and a notice to the surrounding area that something serious is happening. Then there are the insidious connotations of censorship, of book-burning, and record-burning, and even heretic-burning. Great works of literature have been fed to the bonfire’s flames, as have history’s heroes and criminals, patriots, prisoners, and preachers. Finally, a bonfire is eerily beautiful – the red light of the gigantic blaze is incomparable, and impossible to imitate artificially. No surprise, then, that it’s a real and roaring bonfire that Anti-Flag are playing in their latest video: the members of the legendary punk rock band have always been sticklers for authenticity. Beyond that, they embrace the symbolism of bonfire in all its incendiary, contradictory glory.

The People Or The Gun, the latest album from the Pittsburgh quartet, continues Anti-Flag’s tradition of bracing, infectious rock. It’s also, perhaps, the most articulate set of political statements from a group well-known (and well-respected) for their trenchant anti-establishment perspective. Fans of the band’s now-classic Underground Network – perhaps the hardest-hitting protest-punk album of this star-crossed decade – will be thrilled to discover that time has only sharpened the band’s edge. Songs like “Sheep In Shepherd’s Clothing” and “The Great Depression” are fighting words from righteous warriors. “Stabbed repeatedly in the back by the Wall Street suit and the Washington hack”, sings Justin Sane on “The Economy Is Suffering, Let It Die”, “lining their pockets with the people’s cash”. It isn’t just talk, either: a portion of the profits from sales of The People Or The Gun have already been donated by the band to Amnesty International.

“When All The Lights Go Out”, the lead single from The People Or The Gun, envisions a global response to the current financial crisis: a worldwide strike and revolution. Justin Sane and Anti-Flag reminds us that we’re human beings, not “human resources, and while CEOs may need us to run the machines, we don’t need them to be ourselves. Ant-Flag may be uncompromising punks, but their message is an inspiring one, and it’s one that resonates for audiences nationwide. The bonfire in the “When All The Lights Go Out” clip isn’t just an eraser – it’s also a promise of a new start. We watch as penitents, faces stained crimson from the flame-light, approach the fire. Each has something to throw away: an old photo album, high-heeled shoes, a doll. Titles are scrawled on the screen in a shaking cursive hand; written script informs us that we’re no longer bound by the mistakes of our elders. By the end of the clip, the fire seems to be engulfing the band itself – they sing from between the tongues of flame. The same energy that can destroy can also create, and a new world is waiting for us as long as we aren’t afraid of getting burned.

Side One Dummy does it again, bringing you the newest videos from the most talked about artists out there. The band will be playing this year’s Warped Tour and we’ve been hooked up with lots of copies of The People Or The Gun so drop us a line to get the hook for on-air giveaways and info on when they will be coming to your market! If you need more info, call Andy Gesner at 732-613-1779 or e-mail us at info@HIPVideoPromo.com. You can also visit www.SideOneDummy.com or www.Anti-Flag.com to find out more about Anti-Flag.