Arborea “After The Flood Only Love Remains” 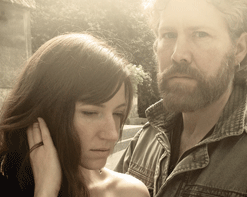 Arborea is a musical duo from Maine, formed in the summer of 2005 by Shanti Curran and Buck Curran. Since 2007 they’ve toured extensively throughout the US, UK, and Europe, released several full length albums including their latest Red Planet which made Rolling Stone ‘Best Under-the-Radar Albums of 2011’, Top Vinyl Pick in Mojo, Portland Phoenix Top Ten Albums of 2011, Uncut Magazine’s Top 100 Albums of 2011, and Editors Top Pick in Guitar Player Magazine.

In this world of suffocating folk-revival knock offs, Arborea has been creating genuine and honest folk music well before it was the cool thing to do. That’s not to say that they aren’t principal players in the scene, in fact, many artists cite Arborea as an inspiration to explore the genre. For their upcoming album, Fortress of the Sun they’ve created possibly their best work yet. Words like haunting and beauty come to mind, which feels appropriate for a band that lists “the sea…..and the wind” as their influences. And although they are clearly a very introspective bunch, they’re also a benevolent crew, curating a compilation to benefit the UN World Food Program. Like NPR’S Bob Boilen, host of All Songs Considered says, they are “always in tune with their surroundings.”

For their new video “After The Flood Only Love Remains”, they’ve channeled the beauty of nature and the simple honesty of youth. The band never appears in the video, instead we follow a lone child, who appears to be living in a makeshift shelter deep in the woods. Her routine is not all too different from most people’s; she wakes up, sweeps her area, does the dishes, sets the table and seems generally content. She then sets out to the river and into the woods and it seems that despite her unfortunate situation she is making the best. But then the rain comes and everything that was so carefully planned is ruined and the harsh reality sinks in. It’s a stark reminder that even the youngest among us aren’t immune to some of the harder realities of this world.

We are so pleased to be working with Arborea and their absolutely stunning video. We would love to hook you up with a copy of their new album, Fortress of the Sun, so please get in touch with us to get your copy! For more information in Arborea please contact Andy Gesner and the HIP Video Promo crew at (732)-613-1779 or email us at info@HIPVideoPromo.com. You can also visit www.ArboreaMusic.com for more information on Arborea.