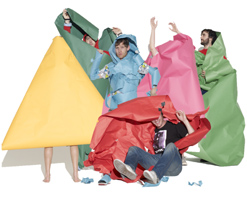 Greetings indie rock lovers! It’s Andy Gesner and the staff from HIP Video Promo, here with the latest clip from a popular band noted for their sensationally creative videos. Architecture In Helsinki introduced themselves to their video audience with the elliptical, hypnotic “This Is A Call” video; two years later, their dizzy clip for “It’5” turned the Aussie group into a human centrifuge. Isobel Knowles’s animated spot for “Do The Collapse” is now acknowledged as an indie masterpiece – 8-bit videogame imagery, a Saturday-morning cartoon plotline, and a climax in which the bandmembers (or the superhero-like icons representing them) are swallowed by a shark-monster in a PacMan maze.

Since the release of the technicolor Places Like This, Architecture In Helsinki’s videos have become, if anything, even more inspired. The bandmembers’ taste for outrageous costuming, comic excess and satire and hyperactive movement has served them well – as has their willingness to experiment on camera. Kris Moyes’s mind-blowing clip for “Heart It Races” used puppets and fluorescent outfits to tell the story of a primitive tribe (played by the members of AIH, of course) living in suburban Melbourne. For the memorable “Hold Music” video, director Kim Gehrig put the musicians on trampolines, and captured their wild and spontaneous mid-air choreography. Their recent clip for the uproarious “Debbie” was a video about making a video – a behind-the-scenes mockumentary and exposé of a stuntman gone haywire.

Josh Logue handled the camera for “Debbie” – and he’s back for the winning “Like It Or Not” video. Now, we’ve all seen animated clips before, but it’s a fair bet you’ve never watched one quite like this: the entire spot has been shot from cross-stitched designs. Pitchfork, among others, has noted the easy correspondence between Architecture In Helsinki’s homespun sound and the aesthetic virtues of yarn-work: the clip, writes Marc Hogan “weaves together brightly colored threads the way the group can at their hyperactive best.” What’s more cross-stitching is a visually-bold technique: much as Cameron Bird’s excited voice leaps out of Architecture In Helsinki’s explosive mixes, eye-catching images knitted against solid backgrounds jump out at the viewer.

Cross-stitching, as it turns out, is ideal for storytelling, too. And although it’s loaded with humorous and provocative images with early 80s referents – check out the Rubik’s Cube hot air balloons – “Like It Or Not” is a narrative clip. It follows the tale of two coconuts who, dislodged from their tree, roll along on a fantastic voyage through some highly psychedelic landscapes. They’re swept up in a twister (which unravels some of the threads), kicked through the jungle by sunglass-wearing hipster lions, smacked across a ping-pong table, putted into the stratosphere by horse-headed golfers, and stowed on the back of a giant pineapple as it floats through purple seas. The coconuts are fully anthropomorphized throughout, and their little stitched faces express sadness, trepidation, surprise, contentment, and relief. Rest assured, there is a happy ending to the journey here. But the best shot of all comes halfway through the clip – a perfectly realized cross-stitched tableau of Architecture In Helsinki in action, hammering away at their instruments as the fuzzy protagonists roll through.

We are thrilled to have the pleasure of working together with Seth Hubbard and Matt Lunsford to bring you this colorful clip. We’ve still got a few copies of Places Like This available for your on-air giveaway needs, so hit us up quick to get your hands on them! If you need more info, call Andy Gesner at 732-613-1779 or e-mail us at info@HIPVideoPromo.com. You can also visitwww.PolyvinylRecords.com to find out more about Architecture In Helsinki.