Arisen From Nothing “Chaos” 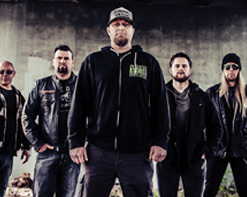 Seattle-based band, Arisen From Nothing offers a lethal brand of metal infused with an adrenaline shot of groove in a sonic rage sure to catch your attention. The five-piece musical tsunami is made up of fearless frontman, Jessie Bringham, six-string shredders, Troy Elmore and Steve Pontius on guitars, Eric Hanson on bass and Brandon Fuller, a former member of national touring act Ghost Town Rebellion on drums. They’ve teamed up with Montreal-based record label Collective Wave Records for the release of their new album, Broken, with their lead single, “Chaos” as their fervent battle cry.

Since the band’s inception in 2008, so much has changed. Just in the past year, member changes have created a true narrative of redemption among the group. In fact, this theme happens to be the namesake of the band itself. The name has always been a nod to the mythical phoenix who cannot be destroyed, according to the Seattle rockers. “In death or defeat, it experiences a rebirth in fire and rises again, greater than before. We have always been big fans of rising to the next challenge and overcoming obstacles, so it seemed a perfect fit.”

And fighting the good fight they are! AFN recently released Broken, on September 29th, 2017. Aside from the nuances of working with new band-mates in and out of the studio, they’re jbarreling into more uncharted territory by working with Collective Wave Records in support of the album. In the face of these new challenges, the band has utilized the model of the phoenix and are now reborn as a rejuvenated force to be reckoned with in the rock world, as exemplified in the album’s lead single, “Chaos”.

“Chaos” opens up with haunting strings, setting the tone for a profound and memorable experience. Soon, a heavily distorted riff peaks its head into the mix, prepping the boys for the big drop that lands like an atom bomb with Bringham’s signature jaw-dropping scream soaring over the mix. The rhythm section takes charge, syncing up and riffing in and out of each other, never allowing the groove to cease. The breakdown features a fist-pumping chant of the word “Chaos” as the intensity peaks, leaving the listener with no choice but to destroy anything & everything in their path. The music video serves as a commanding visual aid, showing off the style with which these rockers shred. The AFN aesthetic bleeds through the screen with old school editing effects, proving that these face melting rockers espouse an impeccable attention to detail when it comes to delivering their blistering message.

Here at HIP, it’s a true honor and profound privilege to tell the Arisen From Nothing story and we’re stoked to share this incendiary clip with you and your viewers. Please don’t be shy about getting in touch to let us know what we can do on our end to get this video into your programming and rest assured we’ll have plenty of outstanding AFN merch to set up online/on-air contests and giveaways throughout the campaign“. Please contact Andy Gesner and the HIP Video Promo team at (732)-613-1779 or email us at info@HIPVideoPromo.com for more info on Arisen From Nothing.