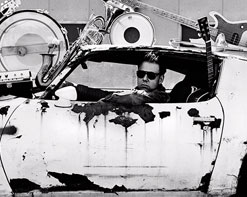 “Heading Up High” is yet the most infectious cut from Embrace and it set the Netherlands on fire when it shot straight to A-rotation at Dutch FM radio. For “Heading Up High,” van Buuren chose to work with the popular Dutch rock band Kensington in yet another example of Embrace’s musical openness with instrumentation and styles. Kensington’s latest studio album, Rivals (Universal), peaked at the #1 chart position in the Netherlands. The band consists of members: Eloi Youssef (vocals, guitar), Casper Starreveld (guitar, vocals), Jan Haker (bass) and Niles Vandenberg (drums). There is a magical space where electronic dance music meets monster rock ‘n roll and van Buuren and Kensington were able to find that phenomenal place.

The music video for “Heading Up High” depicts a crowd of inmates trying to escape a dome-shaped prison by heading up high through the roof. Among this group of prisoners is Hardwell, trying to soar to freedom alongside his fellow convicts, guided by the inspiring lyrics, rock-solid sounds and sturdy beats of Van Buuren and Kensington.

Said Armin van Buuren of Heading Up High, “I wanted to create a song that was just totally unexpected and I’d been drawn to the sound of Kensington for some time. We really vibed well together and I think my long-time dance music fans may be surprised by some elements of this song. It just really soars and I get a great reaction whenever I play it out! It’s got the feel of worlds coming together.”

“Heading Up High” is vibrant and dynamic with all the rock ‘n roll charisma that Kensington brings. It’s got a power-ballad pull that grabs the listener while delivering inspirational lyrics. The Dimitri Vegas & Like Mike vs BOOSTEDKIDS Remix is all blistering attack and sonic aggression perfect for today’s EDM audiences. Dimitri Vegas & Like Mike hold the title of DJ Mag’s “#1” in its “Top 100 DJs” poll and the duo give their all to five-time DJ Mag “#1” winner, Armin van Buuren, on their remix. To those remixes, add the Years Remix and the First State Remix – both with achingly melodic arrangements and emotional swells – and it’s no wonder American radio programmers are taking note. “Heading Up High” is sure to be a festival favorite for summer 2016.

For more information please contact Andy Gesner and the HIP Video Promo staff at (732)-613-1779 or email us at info@HIPVideoPromo.com. You can also visit www.ArmadaMusic.com or www.ArminVanBuuren.com for more info on Armin Van Buuren.