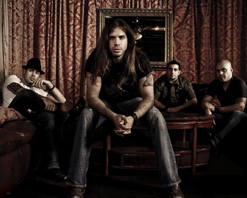 Hello rock and roll lovers! It’s Andy Gesner and the staff from HIP Video Promo, back with a bone-rattling new clip from a ferocious Miami-area hard rock band. The musicians in Atom Smash love the early Nineties Seattle sound, and they’re not ashamed to admit it. They dig metal, too, and heavy Seventies rock, and those tastes are reflected in the music they make – but their hearts belong to Soundgarden, Mudhoney, Pearl Jam, and the other landmark bands that made the grunge era such an exciting time for fans of the six-string. While it wouldn’t be entirely accurate to say that “grunge is back”, it is certainly true that its critical recuperation has already begun in earnest, and that the style still pulls a gigantic audience. And few bands – even ones who were around at the time – capture the sound and the spirit of Nineties heavy rock better than this thunderous Floridian four-piece.

Begin with the singer. Muscled and videogenic Sergio has the perfect voice for the style – a full-throated howl that scalds the track like molten steel. The vocalist punctuates “Sacrifice”, the band’s lead single and most popular song, with galvanizing shouts: the track opens with a drawn-out scream and closes in the same attention-grabbing manner. In between, the members of Atom Smash give everything they have to the groove, laying into the backbeat with a force and passion uncommon in contemporary independent rock. The song is built around the kind of primordial, grinding riff that made Alice In Chains world-famous, and drummer Mark drives it home with sweat-soaked and single-minded intensity.

Their unflagging commitment to heavy rock has won the band a devoted following. In concert, Atom Smash is relentless, bruising, and one hell of a lot of fun. They’ll be taking their show to all corners of their native state this autumn, playing clubs in their hometown, fundraisers in Coral Gables, and festivals in Gainesville. There’s plenty of fantastic performance footage in the “Sacrifice” video, and director Anthony Dones – lead filmmaker at Dark Room Pictures, a respected Miami indie production house – makes sure that the audience understands the hurricane force of Atom Smash in concert.

The band avails itself of other local resources, too. The multi-talented Sergio runs a belly-dancing studio in Miami, and he’s brought an ace pupil to the video shoot. Roshana Nofret is one of South Florida’s most captivating and mesmerizing dancers, and she dominates every frame she graces. Director Dones shoots the band’s reaction to the impossibly graceful Nofret: the musicians are super-cool, but each one finds it impossible not to respond to her movements. Dones teases us – Nofret will be shown for a few seconds, and then he’ll pull the camera away, only to find her again at an unexpected moment, and in an unexpected pose. Her long arms twist in time with the guitar riffs, and her bare belly vibrates like a kick-drum. Dressed in red sashes, Nofret floats through the stage set like a dream, pausing to stare back at the camera through the open frames of a wooden lattice..

As always it’s a big thrill for us to be working with the crew at Working Group Management. We’re help to help you get everything Atom Smash you need, whether it be copies or their self titled album or to catch them for an interview when they come to your town, so drop us a line and tell us how we can help! If you need more info, call Andy Gesner at 732-613-1779 or e-mail us at info@HIPVideoPromo.com. You can also visit www.WorkingGroupMgmt.com to find out more about Atom Smash.