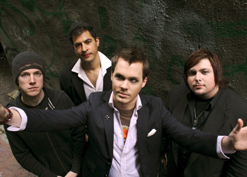 Greetings music video cohorts! It’s Andy Gesner of HIP Video Promo, here today to help bring a group of genuine musical innovators to wider attention. Western Massachusetts isn’t always thought of as an alt-rock hub, but maybe it should be – Northampton boasts a live club on every corner, and there’s a long tradition of unconventional and offbeat pop-rock from the region. The members of a’tris met at Berklee College of Music in Boston – and received the first-rate instrumental training there that is so apparent on their recordings – but they’ve developed their sound and their unique songwriting voice in the Pioneer Valley. From their base in the Berkshires, they’ve become one of the most reliable club draws in New England and consistent producers of lush, fascinating, irresistible indie rock songs.

The a’tris sound has been likened to that of Coldplay, Radiohead, and other dramatic rock bands, and that comparison is helpful – but only as a direction. a’tris shares with those groups instrumental skill, clever programming, a taste for cinematic grandeur and a progressive sensibility, orchestral overtones, and a frontman with a pure, soaring voice. But principal songwriter Mason Taylor has his own sense of harmonics and pop song structure, and the unusual chord progressions and tricky melodies on Lensing have no easy analog in any other contemporary group. Many of these songs –like the gorgeous “Dark Lotus” – are built around hypnotic near-classical piano patterns and shuffling machine percussion. The ballads on Lensing are as singular as they are magisterial: “Selling Oxygen”, another standout cut, marries a dizzy, challenging verse to a powerful and immediate chorus. But pretty is not all they do – guitarist Ben Azar can crunch with the best of them, and much of the programmed instrumentation is delightfully dirty and sonically edgy.

Even when it seems like a’tris is making a straightforward musical choice, there’s always a wrinkle or two: “Automatic Doors”, the single, is, on its surface, a state-of-the-art modern rock number, ready to be slotted into commercial radio playlists across the nation. Scratch a little deeper, and you’ll find curious and suggestive lyrics, a novel harmonic structure, and dazzling instrumental appointments lurking in the shadows of the mix. The members of a’tris are masters of detail: sonic shading, clever samples, half-buried guitar and synth parts that work quiet wonders. “Automatic Doors” is crammed full of these hidden treasures; it’s a song that, like most of a’tris’s work, rewards repeated plays.

Eric Ekman’s strange and beguiling “Automatic Doors” clip demands repeat engagements, too. The band plays their song in a backyard; they plug into amplifiers and perform as commuter trains roar in the background. We follow a sunny-day trip of a young man in his early twenties: he begins his walk through the suburban neighborhood with easy nonchalance. But then the world around him begins to exhibit bizarre characteristics – the portrait of George Washington in the center of a dollar bill on the ground speaks to him, painted flowers on a fence twist in the wind and grow wildly, and strangers on the sidewalk speak to him as if they know him well. Ekman increases the sense of destabilization by slowing the footage down ever so slightly; it imparts a strange dreamlike feel to the scene that perfectly matches a’tris’s rich tapestry of sound. By the end of the clip, the main character is utterly bewildered; when he reaches the backyard where the band is playing, he looks through the slats of a picket fence and finds nobody there.

We’re so very thrilled to be collaborating for the first time with Mike Kreher at Offensive Tie Music Group! Please reach out to us if we can set you up with a copy of the a’tris CD for an on-air contest or giveaway! If you need more info, call Andy Gesner at 732-613-1779 or e-mail us at info@HIPVideoPromo.com.