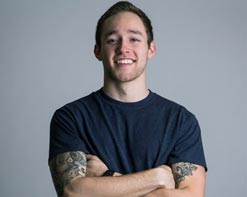 Virginia’s Austin Ausley is, in his own words, “a kid with a guitar, a voice, and a dream, spreading positive music people can relate to.” His modesty is genuine and it’s matched only by his ability to craft songs that are instantly identifiable and radio-ready. As he prepares his debut full-length, he has dropped his newest single, “It’s Alright,” which captures his down to earth approach perfectly, using a soothing arrangement and lyrics to remind us all that even with all of our ups and downs and the vicissitudes of daily life, that things are going to be alright if we just take a breath and relax.

The genesis for “It’s Alright” is about as natural as any song can get. After a particularly rough day on his college campus, Ausley linked up with a friend for dinner and left feeling at ease. A friend doing what friends do. On the way home he began humming to himself and singing “It’s alright, I tell myself I’ll be just fine.” The final product came quickly and by the time he hit the studio to record he had found his sound that pulls in inspiration from Jack Johnson, Ed Sheeran, Alex Clare, and more, finding an effective blend of rock, blues, and soul, all wrapped up in a slick pop package.

For the new video, Austin wanted to find the best way to relay this very relatable message in a visual sense. His approach was basic but powerful. The video follows separate tales of a young man and lady as they deal with their own frustrating moments of rejection and difficulty. We’ve all been there ourselves, and we soon see them embracing the message that everything will be “just fine” and picking themselves up. An ensemble crew joins them, along with Austin, and the smiles and laughter are flowing soon thereafter. Like we said, the video doesn’t rely on fancy tricks or cheap pops, but rather just uses itself as the perfect vehicle to spread the positive and uplifting message of “It’s Alright.”

We’re incredibly pleased to be working with Austin Ausley on his new video and to support this upcoming new artist. We have everything we need here to help get this video into your programming, so please give us a shout here at HIP Video Promo to learn more. You can call us at (732)-613-1779, email us at info@HIPVideoPromo.com for more info on Austin Ausley.