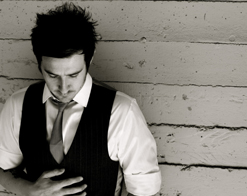 Hello music buffs! It’s Andy Gesner and the staff from HIP Video Promo, here to spread the word about a dynamic singer-songwriter with an instantly-appealing sound. You may not know Austin Hartley-Leonard’s name, but there’s a very good chance that you’ve heard his voice. His cinematic folk-rock songs have been featured on the small screen (in ABC’s Men In Trees) and large (in the film Moving McAllister), he’s performed all over the country in support of his expressive recordings, and his tracks have been downloaded from MySpace and other social-networking sites in impressive numbers. Equally comfortable in a honky-tonk or a music hall, Hartley-Leonard straddles the divide between country music, rock, and alt-folk with ease. Franklin Ave., his latest set, establishes the young singer as an artist for all seasons and all audiences: hip enough for the cognoscenti, straightforward enough for the teens, folksy enough for rural listeners, and sufficiently edgy to appeal to the big cities.

His irresistible voice – equal parts rough and sweet — surely helps. Gravelly, conversational, and immediate, Austin Hartley-Leonard’s pipes are radio-friendly and Grand Old Opry-ready. On Franklin Ave., he puts that instrument to thrilling use – spinning narratives, reminiscing, conjuring characters, and channeling the raw emotion of the heartbroken troubadour. He can be funny, too: he’s got a wry sense of humor that’s made all the more effective by its subtlety (check out the backhanded and one-sided conversation he has with Guns ‘N’ Roses on the clever “Heroes”). In concert, Hartley-Leonard is engaging, winning audiences with his good looks and relaxed demeanor, and then holding listeners spellbound with his riveting performances. He’ll have an opportunity to connect with hundreds of influential fans during a four-gig swing through SXSW.

For Hartley-Leonard, the South by Southwest shows will be something of a homecoming: he spent many years in the Austin area, and he has deep roots in the fertile Texas singer-songwriter scene. He’s made the most of his current Southern California location, too – Hartley-Leonard is a popular local concert attraction and a well-known figure on the Los Angeles club circuit. Many of his talented friends have contributed to Franklin Ave.: members of Brian Wright’s Waco Tragedies back him up on the album, and Doug Pettibone, who has played with Tift Merritt and Lucinda Williams, among others, contributes pedal steel. Charles Newman, who helped Stephin Merritt realize his own witty country-rock hybrid on the Magnetic Fields’69 Love Songs, is behind the boards.

But this is Austin Hartley-Leonard’s show, and he makes the most of the spotlight. Lead single “Golden Opportunity” is a tour de force of high-desert storytelling; throughout, the young singer is direct, observant, and compelling. And as the video demonstrates, he is every bit as commanding onscreen as he is on record. In the “Golden Opportunity” clip, Austin Hartley-Leonard travels the dusty roads near Joshua Tree State Park in California, walking through the arid landscape, interacting with the locals, and pausing to sing beneath a cascade of bubbles. We catch Hartley-Leonard onstage at the legendary Pappy & Harriets Palace in Pioneertown; there’s nobody in the saloon, but the young balladeer is still strumming that banjo and pouring his heart out. Even to an empty hall, he’s still got plenty to say.

We are stoked to be working with Charles Newman and the Mother West staff on the new Austin Hartley-Leonard “Golden Opportunity” clip! And don’t be shy, we have plenty of copies of Franklin Ave. for all your giveaway needs. If you need more info, call Andy Gesner at 732-613-1779 or e-mail us at info@HIPVideoPromo.com. You can also visit www.MotherWest.com find out more about Austin Hartley-Leonard.