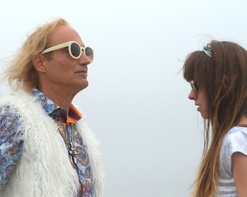 Recently, many news and entertainment websites ran headlines surrounding the 22nd anniversary of the death of Nirvana frontman Kurt Cobain. Any music fan of the moment still remembers Kurt Loder announcing the death on MTV News like it was yesterday. One of those artists was AV Super Sunshine, who penned his song “Just Like Kurt” in recognition of Cobain standing up for peace, love, and tolerance.

They came of age in different decades, but AV Super Sunshine sees parallels to his own life in Cobain’s story. A fragile, imperfect artist whose ultimate desires revolve around not his own personal ambitions, but to make the world a better place for everyone. Last year we brought you his first video for “Just Like Kurt,” the electro-rock remix. This time he has teamed up with one of our favorite directors, Jared Sagal, to deliver another outstanding visual of the original version of the song. Perched on his living room couch, AV sits back and watches an in-depth montage of old footage of Nirvana live performances and Kurt Cobain, the man. Even after all these years, he’s still totally enraptured by Cobain’s presence onscreen.

As a bonus, we’re also including another super cool piece of original content. This “digital branding package” is the creation of director Jared Sagal and it offers the most in-depth examination of the persona of AV Super Sunshine. It features interview footage, a montage of all of his stellar music videos, career highlights, and is generally chock full of great info about what makes AV Super Sunshine tick. It’s fantastic outside-the-box content to consider for programming, we think you’ll dig it!

We are excited to keep bringing you and your viewers the best of the best! If you’d like more information on AV Super Sunshine or Victor House Records, please contact Andy Gesner and the HIP Video Promo crew at (732)-613-1779 or email us at info@HIPVideoPromo.com . You can also visit http://www.AVSuperSunshine.com/.