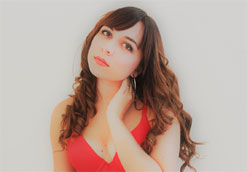 Melanie Heide, who performs as Azmeryth, is an enigmatic 24-year-old indie dream pop artist with a clear vision constructed in illusion and fantasy. Not afraid of breaking the barrier of what it means to even exist, she can be described as anything and everything all at once. She has evolved throughout the years to create a perfect image that encapsulates how she views herself on and off stage. Azmeryth isn’t an alter ego but rather an extension of herself; she describes herself as “not a person, and it’s not exactly a thing either.” She presents herself as something that isn’t tangible- creating a mystery around her that can seem ambiguous while playing with dark themes. Truly a chameleon, she can shift and change but her transparency is what sets her apart from other visionary artists.

Originally from the small border town of Del Rio, Texas, Melanie Heide was inspired by and inherited her passion for music from her dad at an early age. Her father is a musician who grew up listening to progressive rock from the 70s and still preaches its gospel truth. Being raised by creative minds leads to imaginative children, and Heide started singing before she could even speak English. She started writing her own songs by the age of twelve and joined choir that same year. She was highly respected by her peers and remained in varsity choir until her high school graduation. In 2012, she began studying at The University of Texas at Austin, where her struggle with feeling out of place finally came to a close as she joined a classic rock cover band as the lead vocalist. After two years, Heide left the group to continue developing her own music. It was during this time that she created her newfound project/persona, Azmeryth. Her greatest musical influences include but are not limited to Beyoncé, Pink Floyd, St. Vincent, and Marina and The Diamonds. Experimentation is a central theme in her discography, and fashion is certainly highlighted in her video as well. She has always had an inkling towards the visual arts, dabbling in painting and drawing, and does not believe in trends. She has lived many different lives as a prep, a scene kid, a hippie, and a nerd, but she is always herself in every sense in the term.

Azmeryth has collaborated with some of her good friends including Kurt LaVacque who goes by the stage name NTRE (pronounced “nature”) on their songs, “Feel You” and “Rosey” along with other creative projects that are still in the works. Her latest video for “Feel You” highlights all her assets as an artist. Directed by fellow Del Rio native, Jessie Garcia, they crafted a storyline that revolves around a couple who seems to have fallen out of love. The video shoots to them painting pictures of how they feel, as the woman seems displeased in the relationship. Then it cuts to Azmeryth as the anti-Cupid ghost of their lost love desperately trying to make them see that they need to be pulled apart. This dark video is contrasted with some added humor that the girlfriend was into women the whole time.

Here at HIP, we’re profoundly thrilled to be working with such a creative artist as Azmeryth and it’s our sheer pleasure to advocate and fight the good fight on her behalf! We’re confident you and your viewers will embrace the “Feel You” video as much as we have and to have your support for this campaign would truly make our day! Rest assured we’ll have plenty of outstanding Azmeryth merch to set up online/on-air contests and giveaways throughout the campaign so don’t be bashful about reaching out to get your hands on some. Please feel free to contact Andy Gesner and the HIP Video Promo team at (732)-613-1779 or email us at info@HIPVideoPromo.com. You can also visit www.AzmerythMusic.com for more information.