A Bad Think “Life Of A Grape” 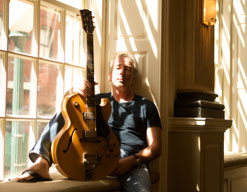 Hello friends, it’s Andy Gesner and the staff from HIP Video Promo, here to spread the news about a fresh clip by an ambitious band with a distinct sonic identity. Lush, impressionistic, beautiful, introspective, moody, hypnotic: all of these words have been used to describe the music of A Bad Think. A progressive act in the truest sense, the band’s songs are forward-looking, compositionally inventive, impeccably recorded, and expertly performed. But while Michael Marquart’s soundscapes are otherworldly, the subjects he tackles in his thoughtful songs are firmly terrestrial – life cycles and natural phenomena, sickness and health, and the inevitable passage of time. Relentlessly optimistic and frequently moving, Marquart’s writing is something to get lost in – it’s a journey, an illumination, an awakening, a dizzying chase after a restless beacon.

Years of creative labor in the music industry have honed Michael Marquart’s vision. Windmark Recording, his studio – one he built himself – is state-of-the-art; fellow Hampton Roads residents Pharrell Williams and Chad Hugo cut many of their groundbreaking records there. Marquart has worked with countless high-profile bands as an engineer, session player, and live sideman, including The Connells, No Doubt, Dishwalla, and Sponge; recently, he’s played drums for Alias and the re-united A Flock Of Seagulls. Released in 2006, the first A Bad Think album turned heads far beyond Virginia; listeners all over the world marveled at the dazzling sound of the recording and the group’s indisputable craft.

Now comes Simple Rhymes, an album that seems destined to establish A Bad Think as successors to the ethereal rock throne last occupied by Talk Talk and The Blue Nile. “Life Of A Grape”, the lead single, is progressive pop at its most crystalline and gorgeous: layers of shimmering guitar, warm washes of synthesizer, adventurous bass, and harmony vocals by Marquart’s daughter Samantha (an emerging solo artist in her own right). Michael Marquart sings in a suggestive whisper that sounds like it’s coming from deep inside the listener’s head; it’s the perfect approach for a song as dreamlike as this one.

The video, too, is an engrossing reverie. Michael Marquart sings and plays “Life Of A Grape” in front of several shifting, suggestive backdrops, including falling leaves, stars in full stream, a wall of vibrating audio speakers, and an impassive mannequin’s face. In one beautiful, soft-focus shot, he takes his hollow-bodied guitar to the sea’s edge, and performs on the mossy rocks as the waves surge around him. (The fetching Samantha Marquart dances through these frames, too, tossing her blonde hair as she does.) There’s also old footage – and black and white stills – of grape harvesters working a Mediterranean landscape, which adds to the hallucinatory-pastoral feel of the clip. Throughout, cross-fades, sped-up sequences, image superimpositions, and oversaturation add to the dreamlike effect; in the “Life Of A Grape” video, everything sparkles.

It’s a pleasure to have the opportunity to work with Bryn Boughton and the crew at BlinkerActive and Windmark Records. If you need more info, call Andy Gesner at 732-613-1779 or e-mail us at info@HIPVideoPromo.com. You can also visitwww.Windmark.com to find out more about A Bad Think.