Badia Farha “Keep On Keepin’ On” 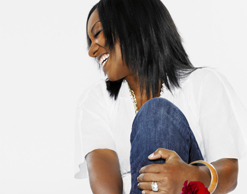 Greetings friends! It’s Andy Gesner and the staff from HIP Video Promo, here with a clip from a soulful new voice that simply demands national attention. Who says that Broadway performers can’t sing hit songs? The recent success of Beyonce Knowles and Jennifer Hudson in the screen adaptation of Dreamgirls ought to demonstrate exactly how permeable the boundary between the Great White Way and the pop charts has become. And Badia Farha isn’t your average musical-theatre actress, anyway. She’s a scene-stealer, a showstopper, a woman whose magnetic presence onstage draws all eyes to her. These are precisely the skills that translate best to music video, and with the propulsive “Keep On Keepin’ On”, she’s made a winner. No need here for big budgets or studio trickery – Farha’s charisma is its own special effect.

Expressive and theatrical “Keep On Keepin’ On” is, for sure, but it’s no show tune. Instead, Farha and her band serve up a ferocious slice of jazz-funk, closer in spirit and execution to classic Stevie Wonder than any other song in current circulation. The message is inspirat ional, and the performance is galvanizing. Other songs on Still Waiting?, her new set, recall Jazmine Sullivan, Erykah Badu, Corinne Bailey Rae, and other pop vocalists pushing the boundaries of contemporary R&B. Farha is a dynamic frontwoman and a whirlwind on the mic; she rides grooves effortlessly, and captivates listeners with impassioned ballads. No wonder that the Newark-based singer has earned the nickname “Lady Rose” – just like the flower that serves as her inspiration, she’s romantic, classy, inviting, and bold.

And while she may be a fresh voice on urban radio, she’s certainly no newcomer to the business. Lady Rose began singing at the age of two; since then, she’s taken the stage in professional productions of Dreamgirls, Rent, Little Shop Of Horrors,Godspell, Sister Act – The Musical, and many other popular touring Broadway shows. She’s already had a spotlight moment at Lincoln Center in the American Songbook Concert Series, and now she adds a first-rate R&B album to her catalogue of accomplishments. It’s a formidable résumé, and one that sets Badia Farha apart from her peers.

But even if she weren’t so distinguished, Farha would still be recognized as a budding star. The moment she begins to sing, there’s really no doubt about it; like Whitney Houston (another Newark native), she’s got a voice that’s best described as a force of nature. In Esteban Serrano’s moving clip for “Keep On Keepin’ On”, the power of Farha’s pipes puts her entire neighborhood at ease. We watch her leave her apartment building and stride down the sidewalk, singing as she goes – she’s confident, perfectly at peace, and, of course, stunning to look at. Wherever she walks, listeners respond – some bounce to the beat in the seats of their automobiles, some hold up signs with messages from the songs lyrics written on them, and some just smile back at the singer and the camera. She reaches the practice studio, plugs in, and begins to play with her band – and before you know it, the whole block has joined her there, dancing and celebrating, and singing along.

We are thrilled to be working hand-in-hand with Badia Farha to bring you the phenomenal video for “Keep On Keepin’ On”! If you need more info, call Andy Gesner at 732-613-1779 or e-mail us at info@HIPVideoPromo.com.