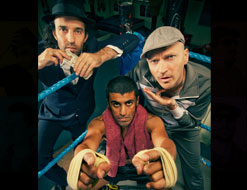 Hello programming friends, Andy Gesner and the HIP Video promo staff here with a genre transcending, dance inducing, culture clashing, musical rapture from Balkan Beat Box. “Move It” is an energetic stomp with gypsy rock motivation and Mediterranean roots. You should expect nothing less from a power trio founded by the masterminds Tamir Muskat of Gogol Bordello, Ori Kaplan of Firewater, and the very talented MC, Tomer Yosef.

“Move It” resembles an octopus in the way it can fit into any genre you put it. It’s effortlessly shapeless and always fresh. Balkan Beat Box blends Mediterranean sounds and sax over reggae infused drums, and call and response vocals in this unique concoction. “Move It” is the type of song that can either get you moving and dancing at a club, get you singing along at a rock festival, or completely relax you while you enjoy sweet puff of hookah. It is easy to find artists that blend sounds and styles on albums from song to song, but it is very rare to hear such a cultural melting pot all in a matter of several minutes on one track. This is exactly what makes Balkan Beat Box’s abilities stand out from their contemporaries.

The music video behind this hybrid gem is just as mind bending. The whole thing takes place in a single room. However, just like the song, the room is a mixture of all types of rooms you’d find in a house. It feels like a living room or a kitchen, but there’s also a laundromat and a toilet seat! The members of the band perform various chores and pop out of every nook and crevice of the hybrid chamber to sing and play the different parts of the song. The room itself also joins in on the beat by using every movable object to clap along with the trio. Yes, even the toilet seats opens and closes in jolly rhythm to accompany our MC’s. The clip comes home as the elderly owner of the room returns and starts dancing to the beat, culminating in dinner preparations! If this sounds like nothing you’ve ever seen before, it is because you haven’t.

“Move It” is the leading single of the Balkan Beat Box’s new album Blue Eyed Black Boy released on Nat Geo Music. This is the electronica-world fusion trio’s third studio album. The band has received dance club success in Europe and college radio recognition in the United States with their previous efforts, especially for the song “Bulgarian Chicks.” The group has also recently been making waves at Lollapalooza, SXSW, and Roskilde Festivals. Balkan Beat Box is now ready for global playlist and club domination with their unique fusion of genres as well as by taking their party worldwide. The group is currently busy touring South Africa and Israel in support of Blue Eyed Black Boy.

We are extremely delighted to be working with the folks over at Nat Geo Music once again to bring you this unusual and extraordinary talent. We will be receiving numerous copies of Blue Eyed Black Boy to facilitate any of your giveaway and contest needs. Also, please be sure to check the band out on the run of west coast tour dates this February. Please be in touch if you’d like to get a video interview with them when they are in your market. If you need more info, call Andy Gesner at 732-613-1779 or e-mail us at info@HIPVideoPromo.com. You can also visit  www.BalkanBeatBox.com to find out more about Balkan Beat Box.