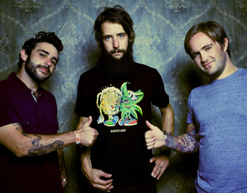 Hello indie rockers, it’s Andy Gesner and the staff from HIP Video Promo, back with a video from one of the most commercially successful and visually recognizable outfits in independent rock. Band of Horses make gorgeous, pained folk-pop that bleeds familiarity and intimacy – so it’s unsurprising that this gang of contrarians have shot a video that examines the perils of closeness. As anybody who has ever played in a band can tell you, the easy intimacy between groupmates can quickly turn into an uncomfortable familiarity; this is especially true for touring acts who log hours together on the road. Wild enthusiasm for the Band of Horses has guaranteed that the group has spent the better part of the past few years streaking across the nation from gig to gig and living together in awfully close quarters. The clip for “No One’s Gonna Love You” pokes fun at that fine line between camaraderie and outright hostility between twenty-something guys who, by virtue of their musical popularity, are forced to behave like married couples.

Indeed, it does often seem that the members of Band of Horses have been sprinting across the country nonstop since the release of their debut EP in 2005. Certainly their achievements have kept them on the front pages of the alt-rock press; they’ve played on the David Letterman show, toured with Iron & Wine, and relocated from Seattle to rural South Carolina. “The Funeral”, the cinematic centerpiece of their first full-length, was ubiquitous for a time – the song was heard in video games, in advertisements, on episodes of One Tree Hill, Kyle XY, and Numb3rs, and in the trailer for the indie comedy Penelope. Recently, Band of Horses has tasted true mainstream success: Cease To Begin, their heralded ’07 set, made its debut in the Billboard Top 40, and lead single “Is There A Ghost” was named one of the best songs of the year by Rolling Stone magazine.

The soaring “Ghost” may have been one of the true anthems of 2007, but if you ask a Band of Horses enthusiast for a favorite track, chances are, she’ll mention “No One’s Gonna Love You” first. So dear to the band’s fanbase is the song that it’s become a concert staple and a single by popular demand. There’s plenty of footage of Band of Horses performing “No One’s Gonna Love You” in Jarrod Tallman’s wry clip for the song, and the shots of the band in action communicate the grandeur and intimacy of their heralded live set.

But the concert shots aren’t the focus of this video. Instead, the narrative focuses on the behind-the-scenes action that’ll be all too familiar to other touring musicians: the groupmembers showering in proximity to each other, brushing their teeth, blowing off steam with beach hijinx, cramming into sleeping bags in tiny rooms. And when they’ve had all they can stand, they grab beer bottles and slam them across each other’s faces. Tallman makes this gesture seem almost affectionate – a kind of extreme version of a high five. This isn’t the first time the Band of Horses have married whimsy with darkness in a clip; the memorable video for The Funeral” told the story of a man distraught over the death of his dog and hurtling toward his own doom. Their remarkable ability to balance menace with warmth and down-home humor with violence will continue to make the Band of Horses one of the most vital acts in contemporary music.

Sub Pop is continuing its blitzkrieg of the music video world, and we are elated to be working with Lacey Swain, Megan Jasper, and the rest of the label to bring you this stellar Band of Horses clip. If you need more info, call Andy Gesner at 732-613-1779 or e-mail us at info@HIPVideoPromo.com. You can also visit www.SubPop.com, or www.BandOfHorses.com, to find out more about Band of Horses.