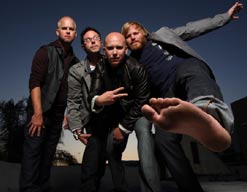 Hello cherished programmers, it’s Andy Gesner and the HIP Video Promo staff bringing you a new clip that is sure to be a summer hit! The latest band to have mastered the recipe for video success hails from Madison, Wisconsin in the form of Bascom Hill. This quartet has everything going for them in their brand new video for “My World (sucks to be you)”: anthemic, in-your-face lyrics paired with an entertaining story about (temporarily) going from rags to riches with cameos from big-named stars and parodies of other famous people to boot.

Bascom Hill bassist Quin Stickler is the video’s main character and appears homeless, playing his bass on the streets to earn a living. A hooded kleptomaniac steals Stickler’s earnings but is immediately stopped by a towering Lou Ferrigno. Yes, that Lou Ferrigno, the original Incredible Hulk himself. Ferrigno then hands Stickler his money back in addition to a mojito, which glows green upon contact (perhaps as a nod at his famed former role?). The scene transitions to a hip pool party where Stickler finds himself surrounded with women and parodies of Slash and Pamela Anderson. Oddly enough, there’s Ferrigno watching over Stickler, smiling as if he’s made the bassist’s dreams come true. This continues with Stickler hitting up a tennis court, where he competes with and ultimately beats the world champion doubles tennis team, the Bryan Brothers, and later ventures into an exclusive club where he’s in the company of Howard Stern and Lady Gaga lookalikes. Stickler then starts rocking out on stage, where his bass then shatters a mojito sitting on a table. He wakes up to realize the whole thing was merely a dream, and Ferrigno was nothing more than his symbolic fairy godmother who has taunted him by changing his cardboard sign to “If you’re not living in my world, it sucks to be you.”

Without a doubt, it’s by far one of the most entertaining videos we’ve taken on this year, and it’s definitely telling of the men of Bascom Hill. The quartet is notoriously known for their killer songwriting, and they needed the perfect video to match the infectious and sure-to-be radio and video hit “My World (Sucks To Be You).” Of course, you can expect that Bascom Hill will fully deliver, especially since they were chosen to be the feature band in the reality TV pilot for Crash Course To Stardom. The show is pretty self explanatory, taking its form in a boot camp scenario. It’s also important to know that Bascom Hill was chosen for the pilot based on their incomparable songwriting. Also adding to Bascom Hills’ accolades? Their songs have also been featured in America’s Next Top Model and various MTV shows like The Real World and True Life.

At this point, Bascom Hill is a force to be reckoned with. Their huge loyal following in the Midwest will definitely expand to the rest of the country with their video for “My World (Sucks To Be You).” As for the song, it’s the lead single off of Bascom Hill’s new, self-titled album set to drop later in the summer around August. So prepare yourself for even more feel-good rock ‘n’ roll laden with catchy melodies and singalong hooks.

Thanks to Bascom Hill and their dedicated crew at Arrival Records, for bringing forth this awesome video to us. If you need more info, call Andy Gesner at 732-613-1779 or email us at info@HIPVideoPromo.com. You can also visitwww.BascomHillBand.com and www.ArrivalRecords.com to get more info on Bascom Hill.