Basement Jaxx “Where’s Your Head At?” 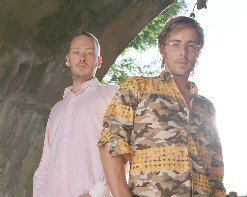 Basment Jaxx has created arguably one of the most riveting videos of 2002. “Where’s Your Head At?” is startling and unsettling. You can’t take yours eyes off the non-stop edgy excitement. Swedish directors Traktor, who last worked on the “Ya Mama” video for Fat Boy Slim, creates an intriguing scenario of humanized monkeys metamorphosizing from novelty entertainment into terrifying predators! This is a “Must See'” video and we encourage all our programming friends to really give this unique visual experience the opportunity to be seen by your viewing public. It views much more like a mini-movie than an actual video, but we guarantee immediate audience response and lit up phones after programming this cutting edge video!

Chances are if you’ve been anywhere near a dance floor in the last few years you’ve heard of Basement Jaxx. Their meteoric debut “Remedy” was hailed as one of the most important records of the ’90s, winning props from press, fans and such club luminaries as Danny Tenaglia and Daft Punk.

Now after three #1 hits and massive critical acclaim, the duo of Felix Buxton and Simon Ratcliffe return with their sophomore release, Rooty. The CD is a masterpiece of state-of-the-art dance music eclecticism. The album mixes classic house, generous lashings of punk, funk, R&B, jazz, hip hop and pop song craft in a mad genre crash that works like a charm. “Where’s Your Head At?” combines kudos to early new wave (Devo, The Cars) and Prince while appealing to even the staunchest electronic music detractor.